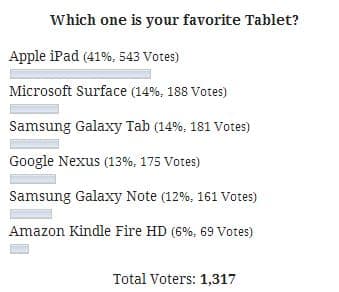 We are running polls in TTJ for a while and this is our first poll result announcement post. We asked our user “Which one is your favorite Tablet?“. As expected iPad wins by 41% vote, but most interesting thing was other Tablets’ position on the list. Check the details in report inside.

There was in total 1317 participants. This poll is for The Tech Journal readers only. To understand the demography of our reader, check our reach.

As you could see iPad wins by a mere 41% votes, in number which is 543 votes. Interesting thing is second place, which is astonishingly Microsoft Surface Tablet. Surface Tablet got 14%, though Samsung Galaxy Tab, Google Nexus and Samsung Galaxy Note got 14%, 13% and 12% vote respectively. And interestingly Kindle Fire got only 6% votes, which seems very shocking to me.

As we had 3 Android Tablet separately, so if we add all those up (14+13+12)=39%, which is very close to iPad. This clears things a bit. So Android is really very close to Apple even in Tablet too, at least to our readers. And maybe we don’t have much visitor from Kindle Fire device, thats why they are in bottom.

Another noticeable thing was popularity of the poll. People actively participated and we had massive engagement from our readers. It means people are very exited about Tablet, not even the lower price Tablet but the higher end one too. And as we could see low price Kindle Fire stays at the bottom, it seems people care for quality.

Here at TTJ, we were always very exited about Tablet and covering Tablet since our beginning at 2010.

What do you think about this poll, how relevant it is in your idea? Share us your thoughts in our comments or in our Social Network.

[TTJ Poll] Where Do You Play Games Usually? Answer Is Still “Desktop”