Nissan NV200 van named NYC’s Taxi of Tomorrow, Travis Bickle cringes and the four-passenger van is slated to hit New York’s streets in late 2013, after which it will be gradually phased in on a more widespread basis.With a manufacturer suggested retail price of around $29,000, the commodious NV200 boasts a 2.0L 4-cylinder powertrain, transparent roof panel, driver navigation system, overhead reading lights and a mobile charging unit and replete with a 12V outlet and two USB ports and also Nissan  placed an emphasis on passenger and pedestrian safety with front and rear-seat curtain airbags, standard traction control and an external lighting system designed to alert others when the NV200’s doors are opening………. 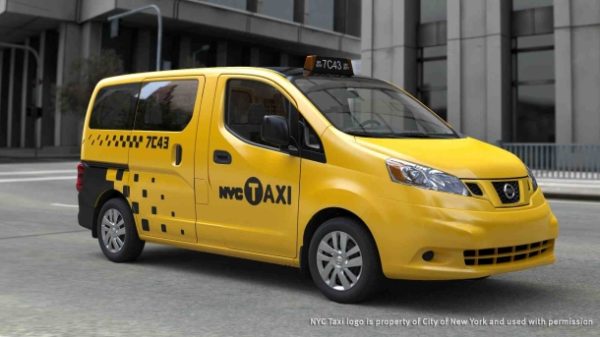 New York is hailing a new era of urban mobility today, as the city with the nation’s largest taxi fleet has selected Nissan to design and supply the next-generation “Taxi of Tomorrow.” The announcements were made today during a City Hall press briefing that included Mayor Michael Bloomberg and Nissan Americas Chairman Carlos Tavares.The New York City Taxi and Limousine Commission (TLC) selected the Nissan NV200 as the exclusive taxi of New York City beginning in late 2013. The award comes after a rigorous selection process that lasted over two years. The competition built upon more than a century of taxi industry heritage to drive the design and creation of a purpose-built vehicle, tuned to the city’s streets. The other two finalists included Ford Motor Co. and Karsan, a Turkish vehicle manufacturer.

“Nissan is proud to provide the next generation of taxis for the City of New York,” said Tavares. “The NV200 taxi will give Nissan the opportunity to showcase our dedication to vehicle quality and urban mobility to more than 600,000 passengers every day.”The Nissan NV200 taxi will be produced in North America at Nissan’s facility in Cuernavaca, Mexico. The Nissan NV200 taxi will be a modified version of the compact commercial vehicle currently available in global markets including Japan, Europe and China. Total manufacturer suggested retail price (MSRP) of the vehicle, with all planned standard features, will be around $29,000.

As part of the program, Nissan also will work with the City and taxi owners on a pilot program to study the use of zero-emission, electric vehicles as taxis. Nissan will provide up to six 100-percent electric Nissan LEAFs to taxi owners for testing in 2012 as well as the charging stations to support their use.“The city’s Taxi of Tomorrow is the Nissan NV 200 – and it’s going to be the safest, most comfortable and most convenient cab the city has ever had,” said Mayor Bloomberg. “We started this process to leverage our taxi industry’s purchasing power to get the highest quality taxi, one that that can expand and redefine the legendary image of New York City taxicabs. The new taxis will be custom-designed to meet the specific demands of carrying 600,000 passengers a day in New York City traffic and the vehicle meets the top priorities identified by the public in our on-line survey.”Planned innovations, which respond to direct input from drivers, owners and passengers, include:

With more than 13,000 taxis traveling a cumulative 500 million miles per year, durability was a key factor in the “Taxi of Tomorrow” selection process. Nissan will train taxi fleet operators to conduct routine in-house service and repairs and Nissan Commercial Vehicle dealers will provide prompt service by providing the first available service bay to taxi operators needing service.In 2007, City officials convened a group of stakeholders, including representatives of taxi drivers, owners and passengers to create a set of goals for the next New York City taxicab, a project called the Taxi of Tomorrow. In December 2009, the TLC issued a “request for proposals,” inviting auto manufacturers and designers to submit their best ideas for a purpose-built vehicle to serve as a New York City taxicab. At the end of the evaluation, the Nissan NV200 was selected, and will be the next New York City taxicab for ten years, beginning in 2013.