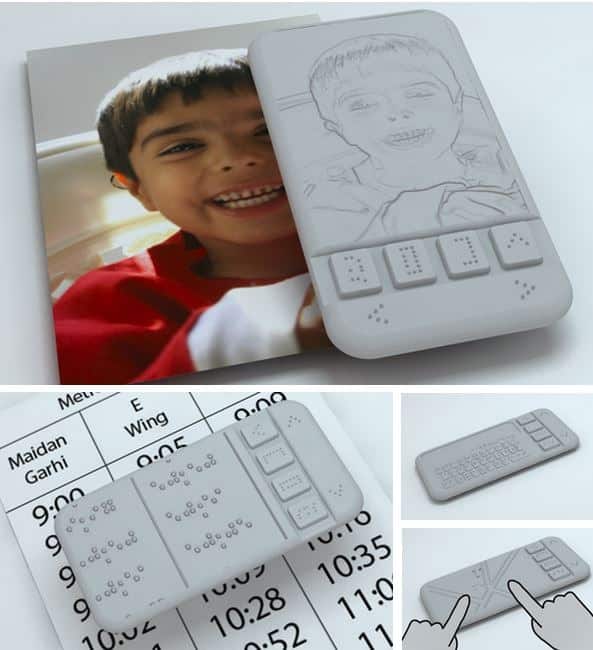 Braille is a system of reading and writing by touch, widely used by blind people. It consists of arrangements of dots, which make up letters of the alphabet, numbers, and punctuation marks. Blind people can read braille by moving their fingers over the dots. Recently, we’ve come to know that Indian engineers have made the world’s first braille smartphone for the blind. The phone can convert text in any language to braille letters. Sumit Dagar, who has completed his post-graduation from the National Institute of Design (NID), Ahmedabad, India has always been passionate about making technology more usable. For the last three years, he along with his team had been trying to build the braille phone at the Centre for Innovation Incubation and Entrepreneurship (CIIE) based on the Indian Institute of Management Ahmedabad (IIM-A) campus. After long effort, Dagar now claims that he and his team have “created the world’s first braille smartphone.” The braille smartphone uses Shape Memory Alloy technology, which is based on the concept that metals remember their original shapes i.e expand or contract to its original shape after use. The phone’s screen will be “capable of elevating and depressing the contents” to form patterns in braille. The ‘screen’ has a grid of pins, which will “move up and down” as per requirement. The grid has a braille display, where pins come up to represent a character or letter.

Dagar said, “The motivation behind the project is to take a giant leap in designing for visually impaired users who are still using retrofitted, inefficient and overpriced products. This device will provide an innovative platform that will enable an altogether new dimension of communicating with the users.”

Dagar has shown visitors a demo video of his product in development at his website, sumitdagar.com. Once the prototype of the product becomes ready, blind people will be able to receive SMS and emails on their smartphones, which will automatically convert texts as well as pictures into braille patterns.

At present, Dagar and his team is collaborating with the Indian Institute of Technology (IIT), Delhi to create the “world’s first braille smartphone.” The venture is being funded by Rolex Awards under the Young Laureates Programme.

Source: The Economic Times
Thanks To: Tech 2