Today, secret societies are often considered a figment of imagination and a thing of fiction. That doesn’t change the fact that many of those existed a century or two ago. The secret document of one of these societies apparently made its way to a machine translation expert who finally unraveled this 250-year old code’s secrets. 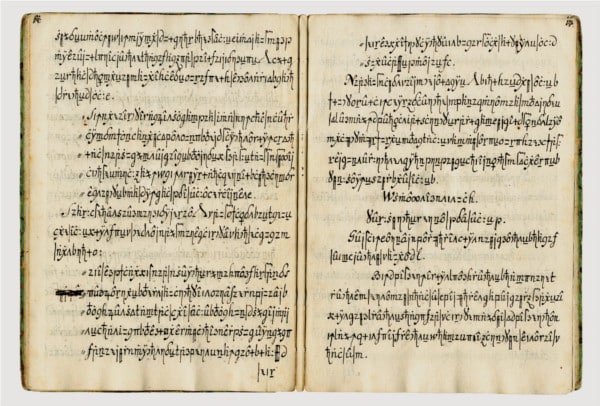 The story began in 1998, when Wolfgang Hock, an expert in ancient writings, gifted his colleague Christiane Schaefer a rather old cryptic text which included a whole lot of symbols. Intrigued by the gift, Schaefer tried to find a way to decipher the text, using her skills and experience as a philologist. But after a few months’ worth of attempts, she couldn’t break it and gave up on it.

Flash-forward to 2011 and Schaefer came across Kevin Knight who is a machine translation specialist at the University of Southern California. She was there to hear a talk by Knight who claimed that a new algorithm that he had developed could break complex codes. He also mentioned that his algorithm treats foreign languages as ciphers.

Fascinated by the talk, Schaefer decided to divulge the details of the ancient text that she was gifted 13 years ago. She gave Knight a copy of the cipher who immediately set upon the text with a keen fervor. Naturally, the algorithm in itself couldn’t do much until Knight worked in closed coordination with it to help it understand different symbols.

The algorithm did, however, reveal how different symbols acted similarly through the text. It also made an educated guess that the cipher was probably based in German language. Building on top of this, Knight soon realized that throughout the text, multiple symbols were used to denote the same German letter.

Within a few weeks, Knight was able to derive a plain German text out of the cipher through educated guesses, the hard work of the algorithm and his own research of the language. The first two lines that he deciphered and emailed to Schaefer read, “This stroke is the sign/the symbol and the beginning of the confidentiality/familiarity that the brother, from now on companion, can expect of us..”

Schaefer was naturally amazed and had her boss, Megyesi, involved on the project too. The duo set upon the text and were able to decipher the few critical symbols that were evading Knight’s comprehension. Based on the text and the symbols it deployed, it was soon discovered that it belong to a secret society of 18th century, called Oculists.

Oculists were based in Wolfenbüttel, Germany, and were keenly interested in both anatomy of the eye and its use as a symbolism. The society was a fairly progressive society and its by-laws entailed that its members would be open-minded too.

Kevin, Schaefer and Megyesi were still working on the text which they termed ‘Copiale’, based on the Latin word that was used in it. Megyesi thought it would do them good if someone with an appropriate knowledge of secret societies could help them discern the significance of the text. So she contacted Andreas Onnerfors, who has examined secret societies for his life.

Onnerfors was able to meet the team and after going through the text, he stated that Oculists were more than just a simple secret society and in their texts, they called for ‘general revolt’ and other ideas which, back when the text was written, would have sounded like a call to violence.

Oculists also revealed a great deal about Freemasonic rituals in their texts. Initially, the team thought it may be out of a sense of rivalry or the fact that Oculists considered themselves as those ‘watching’ others. However, other specialists opined that given the severe backlash Freemasonry had to face back in the days, it is quite possible that Oculists were somewhat of a ‘front’ for the secret fraternity to propagate its ideas and notions, through symbols and highly-secure coded texts that could be read only by those ‘initiated.’

What is most exciting about this affair is that probably for the first time, an algorithm as advanced as the one deployed by Knight, has been used to decipher a text as complex as the Copiale. And the success opens the doors to immense possibilities. There are thousands of cryptic texts of secret societies lying around in the museums of the Western world, waiting to be understood but a lack of expertise has always inhibited specialists from interpreting them correctly.

Perhaps, with this new break-through on the Copiale text, the use of machine-translation algorithms can finally become a mainstream tool for deciphering cryptic texts from earlier days.

Recharge Your Cellphone In Just 20 Seconds!

Indian Engineers Made World’s First Braille Smartphone For The Blind

Fiber Cables Made of Air Transfers Data At 1.5 Terabit/second