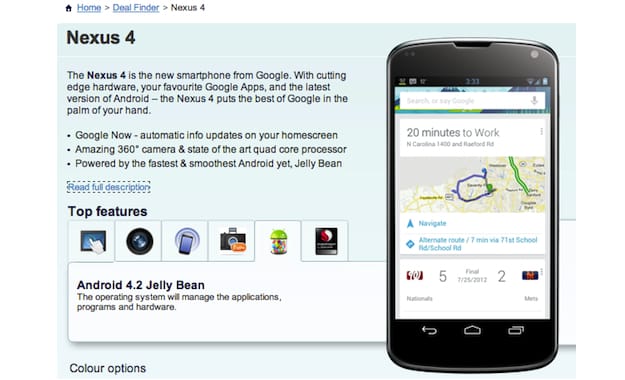 This week, Apple has unveiled its iPad Mini tablet PC and Microsoft has officially released Windows 8 OS and systems. Who’s next? Google, with its Android event scheduled on October 29. And, the stars of the event are most likely to be Nexus 4 and Android 4.2.

What do we know about Nexus 4 or Android 4.2 so far? While Android 4.2 is expected to be a minor update from the Jelly Bean, Nexus 4 is an all new smartphone from Google. We have already seen some leaks of Nexus 4 images and review. Some other additions on the rumor rail are – a leaked listing of Nexus 4 by a UK retailer showing images and specs, a leaked image showing a picture taken from Nexus 4, and some leaked images of the phone itself found in a bar.

The listing of LG-Google Nexus 4 in a UK retail site made waves on tech blogs two days ago. You can see the screenshot of the listing by Carphone Warehouse below. The case of leaked photo taken by a Nexus 4 Android phone was a bit old compared to the first one. The photo shows an office setting and shared on Google+. The metadata reveals that the photo was taken through a Nexus 4’s built-in main camera. The latest leak of some images of the phone itself is a saga. A Nexus 4 phone was left behind by a Google employee at San Francisco Mission District 500 Club. The phone was later found by a bartender and passed onto a regular named Dave who tried to return the phone to Google. After hearing from Dave, a Google ‘cop’ was dispatched to retrieve the phone. The pursuit resulted in a “wild goose chase” and the firing of a Google employee. The phone was ultimately returned to Google through the Police. But, some images, taken in the meantime, were leaked too. But, consumers won’t have to resort to just rumors and leaked images for long. Just two days from now, Google is expected to unveil Nexus 4 in an Android event at New York City.