Popular freelance writer and blogger Laurie Stark has written an interesting piece published on Technorati about what she calls our “antiquated ideas about privacy” and how we should’nt be hating on Google Buzz so much. She calls Google’s new technology “revolutionary” and says Buzz is changing the world. 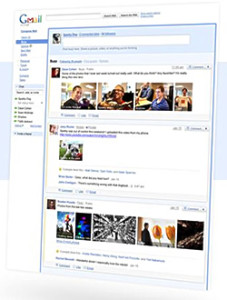 Why You Need to Get Over Your Aversion to Google Buzz

Approximately 30% of the updates in my new Google Buzz account are pithy snarks from people claiming they will never use it. I was shocked by this. And then I realized I shouldn’t be.

What Google is doing is revolutionary. Here’s what Buzz is changing about the world (or, more specifically, reflecting in a world that has already changed):

It’s changing our antiquated ideas about privacy.
Some of us still think that if we have a blog, Twitter, or Flickr account, and don’t market it to the masses, that only our friends will see it. This is untrue, and it’s becoming less true all the time.

Everyone from your ex-boyfriend to your great-grandma is becoming more savvy with Google alerts, backlink monitors, and IP stat counters. Facial recognition technology means that someday soon people will be able to search the internet for photos of you, of your brand logo, and of their copyrighted image that you stole.

It shouldn’t be a secret that what you do on the internet is not a secret. Google Buzz illuminates this by auto-following your top contacts (you can manually unfollow) and connecting all your social media accounts in one place.

The cautionary tale of a prospective boss finding booze-y photos of you on Facebook is practically a ghost story we tell around a campfire. This image of the stodgy boss, ruling with an iron fist and a three-piece suit, is already a relic. The modern truth is that your boss probably has booze-y Facebook photos, too.

The scare factor of this story masks a larger shift in our society: one from private to public. You can hate it, you can fight it, and you can complain about it on your blog (which your boss reads, btw), but know that your dissenting voice is part of a larger historical chorus that has decried every major shift our society has seen (including such cultural crises as electricity, telephones, and the invention of Autotune).

Point: If it’s truly private, it probably shouldn’t be on the internet. But keep in mind that our historical definition of “private” is changing, and that most of your secrets probably aren’t as damaging as you think.

It’s changing our antiquated idea that “We Need to Read Everything.”
When Twitter came around, people flipped their shit about the lack of sub-grouping. More specifically, I flipped my shit about the lack of sub-grouping. “How am I supposed to keep up with every single update my friends tweet if I have to plow through pages of banal musings from strangers?”

Twitter eventually cowed to pressure and the sub-grouping feature now exists, but I barely use it. I appreciate that Twitter doesn’t expect me to keep up. The question is “What’s happening now?” Not “What restaurant recommendations was my friend looking for last night?” Who cares? He probably doesn’t even care. He cared last night and I missed it and life goes on.

Example: My friend Caroline posted to her gchat status that she was looking for pizza topping ideas. Several friends responded via Buzz (side note: it’s likely that none of us would have responded via gchat). Seeing that update this morning was useful– I was able to reply and suggest pear with gruyere (excellent!). Seeing it tomorrow after her grocery trip? Not helpful. I’ll scan what’s new on Buzz when I happen to click over, and for anything more specific, I’ll search.

Which brings me to a major advantage Buzz has over Twitter: Google’s search engine. I’m now able to search all public (or viewable to me) gchat statuses, blog posts, status updates, emails, tweets, Flickr comments, and more in one easy click. No more trying to remember “Where did I see that link…?” Or “What was that link I posted…?” Now it’s searchable.

The era of Information Overload may actually be ending. Why read something that only mattered last week? With Buzz, we can see what matters right now– and search for the rest.

It’s changing our antiquated ideas about Internet as Social Time Waster.
One of the most interesting outcries against Buzz is people calling it a time-suck. On the contrary, I think Buzz could be heralding the end of the era of Internet as Time Waster.

At least half of my current e-time is spent flipping between social media outlets: blog, email, Facebook, Twitter, FourSquare, Google Reader, gchat, Flickr, etc. When I started using iGoogle to keep my email, Facebook, and Reader in the same place, the first thing I noticed was how much time it freed. The feeling was uncomfortable. Suddenly I had no excuse to click over to Facebook or my RSS reader– I could already see them.

I experienced this phenomenon again when I got an iPhone. I’d check my Facebook, Twitter, and email on the bus ride home and by the time I walked in the door, there was no reason to open my laptop. At first, I’d open it anyway, but refreshing an already-emptied inbox quickly lost its luster. So I started reading more.

I think Buzz– or whatever improved model may replace it– accomplishes this tenfold. If I choose, I can have all (or almost all) of my feeds, communications, and social media outlets in one place. This means that in a single click, my social time wasting for the hour is complete. No new messages.

That said, I don’t think Buzz is perfect. I don’t need to see the Buzz unread count in my inbox, and I definitely don’t need Buzz to email me every time someone replies to a comment. These should be options, not the default.

But overall, I think Buzz is a harbinger of what’s to come: less time-wasting, less information overload, and less false sense of privacy.

Leave your comments and let us know if you’re pro or anti Buzz.

Nokia Releases App That Takes Your Feelings Into Account!

Google not planning to remove Buzz from Gmail