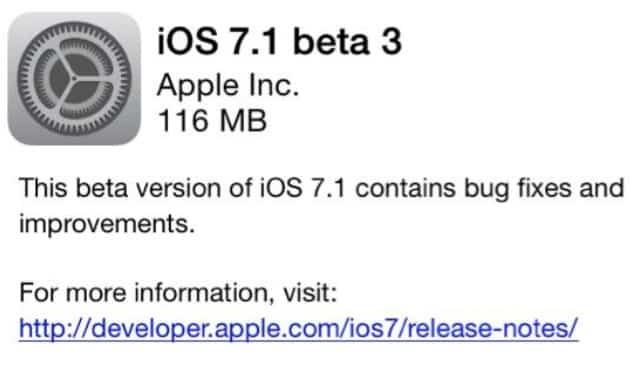 Apple has come up with the third beta of iOS 7.1 for its developers. The new build apparently takes care of the issues users faced in creating an iCloud account and fixes the troubles with the audio books playback. Since the beta releases are usually limited to developers, the improvements and fixes in iOS 7.1 third beta can be seen only by a few. However, reports from these developers suggest that the new beta is titled ‘Build 11D5127c.’

The new release fixes an issue which can cause problems when a user tries to sign up for an iCloud account. Moreover, the update also removes iCloud Keychain errors which were reported frequently in the last build whenever the users turned on the aforementioned feature.

Another problem which was identified in iOS 7.1 was that it may not play back audiobooks on iPhone, iPad and iPod Touch. The release takes care of this issue, which would be of particular relief to iPad users. However, if based on this release, you believe that Apple may unveil the final update for all users soon, that may not be true.

Reports suggest that there are still a number of issues in the upgrade and Apple is speedily working to resolve them. Some of these still-existent issues include 32-bit Bluetooth applications on 64-bit devices and a false error message on iMessage after a message is sent. It would appear that while Apple patches these bugs, we will have to wait a while before the update is finally released to the general audience.