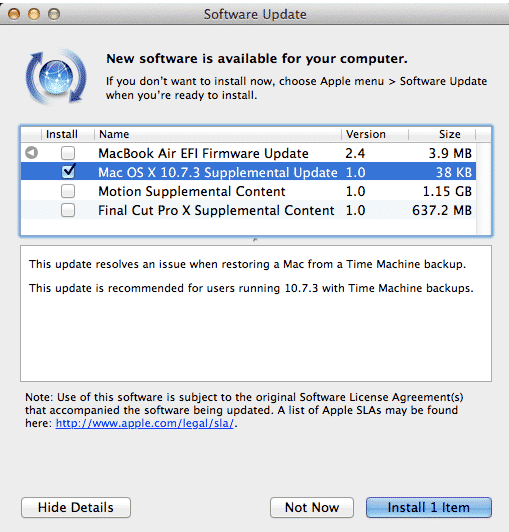 Some users had been complaining that ever since they updated to OS X 10.7.3 they haven’t been able to restore their Mac through Time Machine. Apparently, Apple has heeded their plight and has now released a supplemental update to OS X 10.7.3 that should solve this problem. Of course the update will require that you run OS X 10.7.3 on your machine before installing the update.

Those users who are running earlier versions, they will have to first update to OS X 10.7.3 and only after that, they will be able to install this supplemental update. You can either check the Software Update for this or manually apply this patch.

The total size of the update is 24.55 MB. To manually apply the patch, you can download it directly from the update’s web page here.

If you are user who has already updated to OS X 10.7.3 but haven’t attempted restoring your Mac through Time Machine, it is pertinent that you first install this patch and only make the attempt. This is because many users have been unable to restore their Mac after they updated to OS X 10.7.3 and this update specifically deals with this problem. Apparently, the update accomplishes this by installing a particular file called ‘TimeMachineUpdatePayload’ which is most probably used to force the Time Machine to exhibit normal functionality and let the restore happen when asked for.

We do hope that this solves the problem for most Mac users who’ve been experiencing issues with restore through Time Machine.