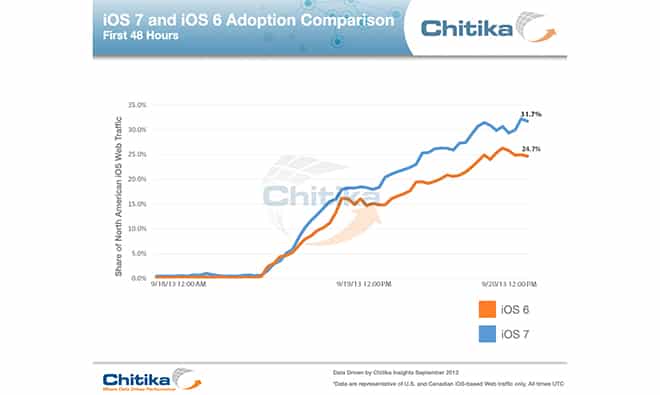 The numbers have been released by Chitika. Chitika is able to categorize the web-based traffic it analyzes, on the basis of the operating system a given handset is running. Back when iOS 6 was released, the ad network crunched the numbers to reveal that within first two days of its availability, iOS 6 adoption was 24.7.

iOS 7, on the other hand, has been able to reach an adoption rate of 32% within the first 48 hours, according to Chitika. In this, the new iOS version has clearly outdone iOS 6, which may primarily be because of the plethora of new improvements and features that have been included in iOS 7.

With iOS 7, Apple is taking a radical step forth. The company has rehashed a lot of design elements in the new version, making it look brighter, cleaner and somewhat Android-like. Not only that, Apple has also packed many new security features in the latest release.

iOS 7, analysts agree, is a stepping stone for Apple. The company may eventually come up with a new iOS version which will incorporate the features of iOS 7 and radically change the iOS platform. Whether or not that happens is remain to be seen. What we can be sure of is that iOS 7 has really clicked with iOS users who are rapidly updating their devices.