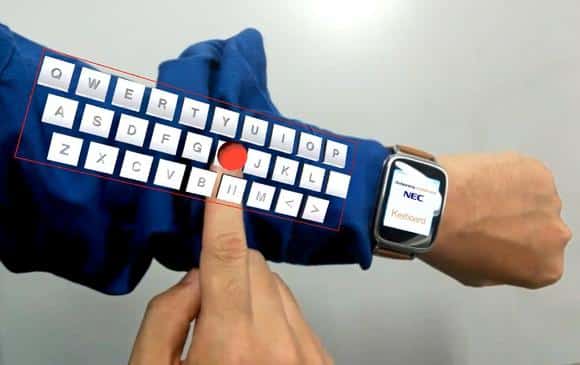 Japanese IT company NEC Corporation has invented a user interface that can turn your forearm into a augmented-reality keyboard by using eyeglasses and a smart watch. The company unveiled this system called as ArmKeypad which is intended to give users a ‘hands-free’ way of typing while inputting text into database. The device provides a set of glasses which will allow you to visualize the virtual keyboard and your smartwatch will detect the typing speed.

NEC Corporation claimed ArmKeypad as better that other next generation input method as it can detect finger movement and count the time of how fast you are typing. It has also alter keyboard displays to show the view of the keys.

Without carrying anything with you, you will get the feel of wearing a keyboard or input buttons on your skin. Along with all this features, you can control this device through voice recognition. The company has promised to improve the features of this ArmKeyboard before they will make it available on the market in 2016. Looks like, we have to wait till next year as they did not mention anything about price.

Cue: An Affordable Lab-In-A-Box For Testing At Home