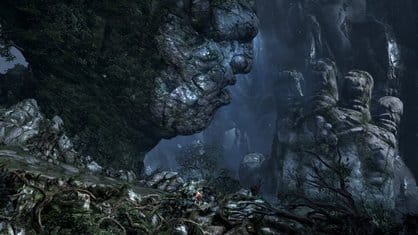 Just like we saw a PlayStation 4 title, is how forthright journalist HipHopGamer described the secret footage of Kratos battling the ‘Spider-horse’ boss in God of War III. With few days to GOW’s release, we’ve seen the same footage and can confirm that – while not quite as astonishing as you might expect of a PlayStation 4 game – Kratos’ PS3 debut is a technical showcase. Above: If you look carefully, you can see Kratos in the bottom middle

What’s so special about Kratos’ battle with the ‘Spider-horse’ boss; resembling a horse’s head with huge insectoid limbs? The intensity is staggering, but what really impresses is its ‘living’ torso made of rushing water and – above all – the fact that the battle is taking place on the back of a Titan as it climbs Mount Olympus. When the camera scales back, the huge boss becomes a blur, while Kratos is barely bigger than a pixel – yet, amazingly, you’re still in control. Above: Again, a dinky Kratos, this time on the left, with the giant horse on the right

“Dynamic environments mean we can take literally anything in the game, including creatures or in this case, extremely large thousand foot plus creatures,” reveals Sony Santa Monica’s John Hight, “And turn them into an environment that Kratos can now navigate, battle on, find treasures.” The idea was mooted during God of War on PS2, but only PS3’s technology allowed the developers to build it. A similar technique was employed by Naughty Dog in Uncharted 2, but Hight claims GOW3’s approach is more advanced. “Ours is a soft body collision which allows us to take any organic character, and turn it into a level. We’ve been working on it for almost two years.”

Sony want to keep much of the game secret, for fear of spoilers. “I’ve seen a lot of film trailers, that when you see the finished movie, feels like you’ve put the ten commercials together,” reveals GOW3’s director Stig Asmussen, “That’s why we haven’t put out a ton of screens.” Asmussen reveals that scale will play a big part in scenes dubbed the Great Caverns with huge wooden crates hanging in an open room. The Caverns will be one big puzzle, where you construct something to unlock an even more elaborate set of puzzles. Above: It takes a moment to see that the horse is crawling on Gaia’s giant stone wrist. Kratos is in there somewhere

More intriguingly, as Kratos scales Mount Olympus, you’ll get to explore the home of the gods in all its glory, including the lush Olympus Gardens, a place of beauty where the gods go to reflect. Sony aren’t ruling out running the whole game in 3D – but only via a download patch later in the year. “I know that it’s something we could do – not incredibly complicated” reveals Asmussen, “It would kind of be like looking in on a small world living in your TV.”

GOW’s technical prowess reflects in its native 720p resolution, with a variable frame rate between 30-60 frames per second, depending on the intensity of the scene. GOW3’s dynamic lighting is only possible due to the processing power of PS3’s Cell SPU chips. “The High Dynamic Range (HDR) lighting technology – when using Kratos’ sightline – will emulate the human retina, causing players to feel a sharp brightness when Kratos leaves a dark area and enters a sunlit area similar to how the human eye adjusts,” reveals GOW3 UK Product Manager Claire Backhouse, adding that the game is only possible on PS3. The soundtrack’s equally lavish, recorded at Skywalker Sound and remotely in Prague (via a link up), and spanning 26 hours of brass, 12 hours of strings, 20 hours of choir vocals, cut and compressed into – we can confirm – GOW3’s duration of over 10 hours. Why use a live orchestra? “Samples are good, but you miss the emotion… even though it’s mostly angry emotions in GOW3,” quips Composer Cris Velasco.

Technical issues aside, it’s still a game about ripping foes in half, as perma-furious anti-hero Kratos scales Mount Olympus to settle his dispute with the gods once and for all… well, for now. “It’s certainly the end of the trilogy, capping off the story we started in GOW”, confirms John Hight, “But we’re not going to let the franchise go, just like that. We’re going to be careful about what we do next, and make sure we have something interesting to tell.” What exactly? One theory is that Kratos’ abandoned brother will take the limelight but either way, it’s less likely to look, than be, a PlayStation 4 game. Until then, the wait for GOW’s debut is as tantalising as ever – and we’ll have the full review on Monday.