GAME REVIEW- “This is 238 AD. The World has been changed.” And The Game of Thrones: Reloaded began. This third person role playing (RPG) action-strategy game is published by Atlus. The first game of the series, The Game of Throne Genesis, was published by Focus Interactive in 2011. Both the games are based on HBO’s original series The Game of Thrones, inspired by George R. R. Martin’s award winning and best-selling fantasy series A Song of Ice and Fire.

Years have passed since Robert Baratheon took the Iron Throne from the Targaryens in a war that saw bloodshed by men from all reaches of the Seven Kingdoms. But, even in the present relative peace, tensions are high. Two heroes of the war have each had their lives go in drastically different directions – one to the inhospitable Wall to the North, the other across the Narrow Sea to the Free Cities. However, not even those, far removed from the intrigues of the Seven Kingdoms, are immune to their sway. Strife grows in Riverspring, the seat of House Sarwyck, as the aged Lord Raynald Sarwyck lies ill with only his daughter to govern the interests of the town, its people, and the surrounding lands. Far to the North, the Night’s Watch is stretched even thinner as another brother has fled their ranks. Now, the two warriors are being called back to their old lives, one to return home to pay his final respects, the other to head South at the behest of the Hand of the King. The game of thrones is a play, and only the winners survive. 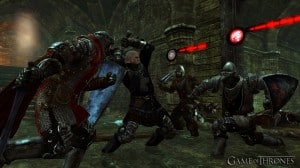 Mors Westford: The Westfords are a bloodline of knights who have been in service to House Lannister for generations, and Mors is the last of the Westford line. Its sigil is a black dog on a blue field. Gruff and direct, but also an experienced strategist, he prefers effective action to fruitless discussion. As their sigil suggests, the Westford family has deep affection for dogs and House Westford has been known to utilize special training methods for their canine companions.

Mors Westford is distinctive for always being accompanied by his dog. He has a skinchanger ability that enables him to take control of his animal. To do so, Mors must enter into a trance and can no longer control his own body. When in combat, Mors does not have enough concentration to use his skinchanger ability, but he can give orders (abilities) to his dog.

Mors’ dog can carry out three types of actions:

• Attack enemies: the dog can close in on enemies to attack them without arousing suspicion. Please note that the dog can only attack a lone enemy.

Alester Sarwyck: Alester, A red priest, is the eldest son in House Sarwyck, and heir to Riverspring. He gave up his inheritance when he decided to flee Westeros and sought salvation by becoming a follower of R’hllor, the Lord of Light. Before leaving Westeros, he was a knight serving House Lannister and fought in Robert’s Rebellion. His skill as a swordsman combined with the powers of R’hllor make him a formidable fighter who can use a variety of tactics to takedown his foes.

As a red priest and follower of R’hllor, Alester has magic powers that enable him to control fire. Some of Alester’s powers are:

• Incombustibles: Alester has mastered the art of pyromancy, which enables him to be more resistant to flame attacks.

• Flaming sword: With the help of his powers, Alester can set his sword on fire, causing even greater damage. 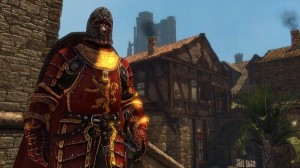 As I say, the game has a fabulous graphics quality. During playing the game, I found it exceeds my expectations in comparison to other RPG games mentioned above. I have not seen such fantastic works of lighting after The Witcher 2. The story-line of the game is full of action and diplomacy but not too long as Skyrim. Players do not have to wait too long for combats or action. The characters 3D model is so realistic and detailed that it always fascinates me while I play the game.

Now, let’s talk about game-play and strategy. The game is different to a large extent of its previous release; Game of Throne Genesis (a complete strategy based game). However, this game is actually a combined pack of RPG model, and click and play strategy. I think the gameplay feature of decision making is very fantastic. Access to different types of weapons is one of the coolest feature of this RPG game. For each decision, the plot of the game turns to a different angle. Different types of character features with their own abilities, free choices of different types of combat styles makes the gameplay more interesting. I especially like the slow-motion feature during combats.

Other than the cool features of gameplay there are some elements which I think antagonize the game’s appeal. The gameplay is cool but the click and play style during combat makes the game a little bit off. I am still playing the game but have not found the way to dodge and counter-attack yet. In the game menu there are no options to customize the keybord controls. There is also another problem of camera pan control. Players always have to push right click button of the mouse for free looking. There is no easy way of inventory management without pausing the game. I think, these drawbacks make the gameplay little slow.

In spite of these factors I have to give credit to the sound department of the game. The sound quality of the game is equivalent to that of HD movie quality. There are a lot of excellent sound tracks in the game. The sounds during combat, voices, and music appears to be so real that it gives a sense of thrill to players.

The game has been published by Atlus and developed by Cyanide which was also in-charge of development of first, The Game of Throne Genesis for Microsoft Windows. The game was released on May 15, 2012. The game is only available in single player mode.

HungryAge – Play With The Dinosaurs In iOS [Price Drop]