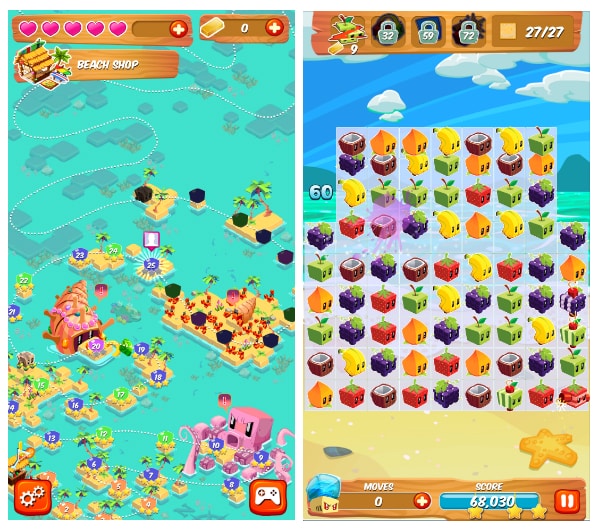 Many mobile games have made it big in the industry, primarily because they’re sheer fun and quite addictive. Rovio‘s Angry Birds franchise is on top of that list and now, another Rovio game ‘Juice Cubes’ may join the ranks. It comes with tropical backgrounds, fairly well done animations and stunning graphics. Rovio has made sure that the characters, the music, the colors and the overall look and feel of the game is well in league with its other more popular offerings.

Like in any other match-three game, you can connect three or more cubes through a horizontal, vertical or a diagonal line. Naturally, you will need at least three cubes to complete the line. But if there are more than three cubes in line, you can draw it further to unlock bonuses and bag high scores.

You are given goals to complete in each round and these goals get harder in every subsequent round. While the game itself is free and quite fun, it does come with some limitations. The in-app purchases, for instance, become somewhat inevitable as you go forward in the game. To unlock the higher levels, you are required to purchase gold bars which cost $1.99 for 15 bars.

You can also ask your friends to join in which may help you unlock higher levels for free but at one point or the other, you will have to go for in-app purchases. Juice Cubes is a fun game in all and if you’re into the likes of Candy Crush Sage, you are sure to enjoy this game probably more.

You can download Juice Cubes from the App Store for iOS or Google Play for Android.