Shipments of Apple’s just released third-generation MacBook Air from the supply chain already reached 400,000-500,000 units in June and the volume is expected to remain strong throughout July and August and with this report, may be Apple interested more in lightweight notebooks. Apple’s latest MacBook Air is set to be yet another huge success for the company and pple announced shipments of its Macs during the third quarter reached 3.95 million units, a 14% increase over last year’s numbers. Apple’s orders so far hint that total MacBook Air sales for 2011 could hit 14 million units and Apple has a vise-grip on ultraportables like it has on tablets…………. 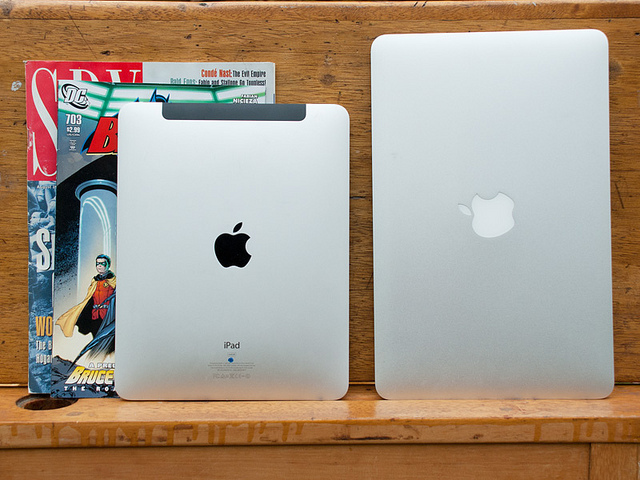 With the company on track to sell well over 10 million Airs this year, it may well see the product ultimately become its bestselling laptop. And the company will only accelerate this trend when it brings out a larger ultraslim model for all intents and purposes, will also be a MacBook Air. Samsung with the Series 9 is the only big-time, high-profile PC competitor in the Air‘s price range right now. The rest is rumor and marketing promises, under the banner of Ultrabook. Consumers, generally speaking, buy Windows laptops by the hundreds of millions globally every year because they’re relatively inexpensive and run all of the most popular applications. Not because they’re ultraslim and/or ultralight. In other words, PC laptops are the practical buy. Apple has become a mobile device juggernaut. So, if it’s more or less a zero-sum game, Apple’s post-PC devices will continue to take share away from the diminishing PC juggernaut by bringing, for example, young buyers into the more profitable (for Apple) MacBook Air fold.

Call it PC versus Mac, the Ultrabook edition. A possible result: Apple is the only device maker selling large numbers of the new breed of powerful, Sandy Bridge-based, sub-3-pound ultraportables, aka Ultrabooks. As is the case with the current tablet market, consumers will look to Apple for ultraslim post-PC designs but continue to choose in diminishing proportions relative to Apple, HP and Dell for the traditional computing paradigm. Which brings us to Dell. For now, the No.2 U.S. supplier of PCs has nothing in the consumer market to compete with the MacBook Air. After abandoning the well-crafted, well-designed MBA challenger, the Adamo, Dell went to a completely different market segment, with the XPS 15z. It’s relatively slim, but it’s not small and certainly not portable like an Air. That leaves us for now with Samsung and the upcoming Asus UX21 and UX31 (not shipping yet) as the most notable challengers to the Air.

Next Beta Version Of Apple iOS 5 Coming This Wednesday!!!

Toshiba Upgrading Its Satellite U And M Laptops With Haswell Processor