Google Buzz for Mobile Debuts With a Bang

Google is simultaneously launching their new social sharing service for both the desktop and the mobile platforms. While Gmail buzz is pretty cool, it’s Google Buzz for Mobile that has the techsphere buzzing.

This service allows users to keep up with their friends via their cell phones. While Buzz isn’t the first location-aware sharing service on the market, it’s easy usability has generated quite a bit of interest among initial users, although its operation hasn’t been smoothed out yet. 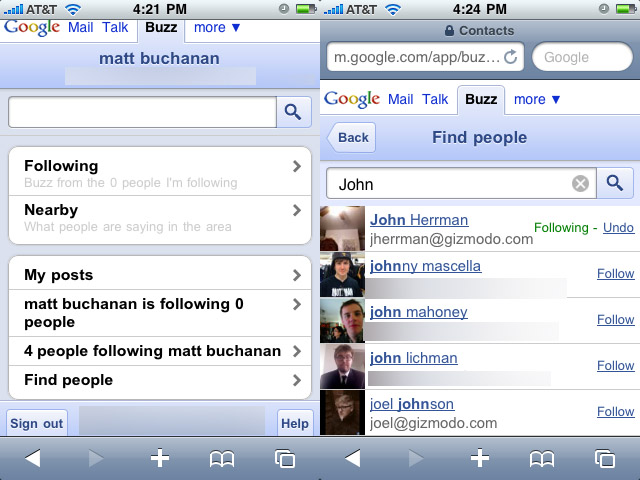 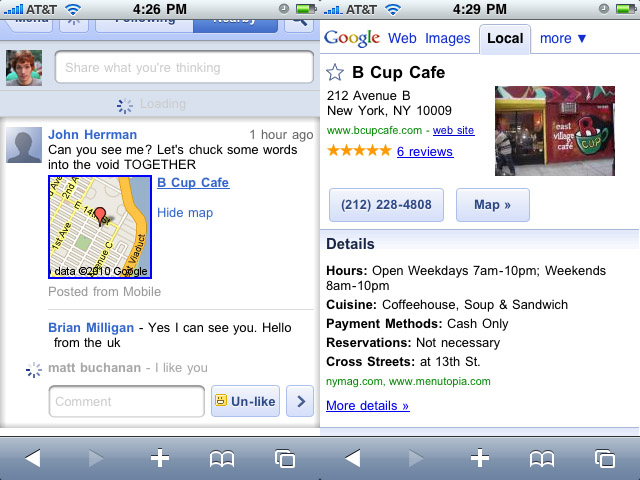 4. Now let’s see what’s going on nearby. Oh hey, it’s Herrman. Creepy! I’m going to comment and Like his status. He’s at B-Cup Cafe, which I think kind of sucks. You can see it on the map here. Popping over to the listing, you can see these reviewers are deluded. The dumb thing in the interface so far is there’s no good way to get back from the listing to the buzz. 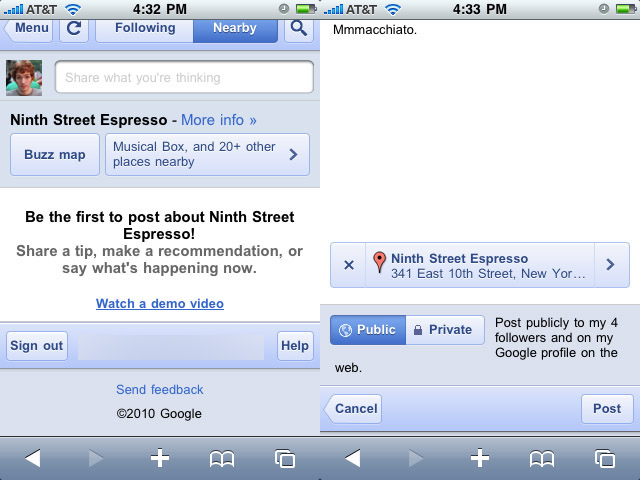 5. Okay, let’s post something. If it can’t find your location, like it can’t find me, you can search for where you are at. It’s limited right now to places in Google’s database, so you can’t Buzz from your apartment. Nobody’s said anything about Ninth St. Espresso yet, so I’m going to right now. Make sure the blue location box in the bottom of your post—sometimes it doesn’t follow through, which happened one of my earlier buzzes. Oh, an easy way to post is to use the voice search in the iPhone or Android Google app, starting your phrase with “post buzz.” It works, to the extent that Google’s able to normally understand you. 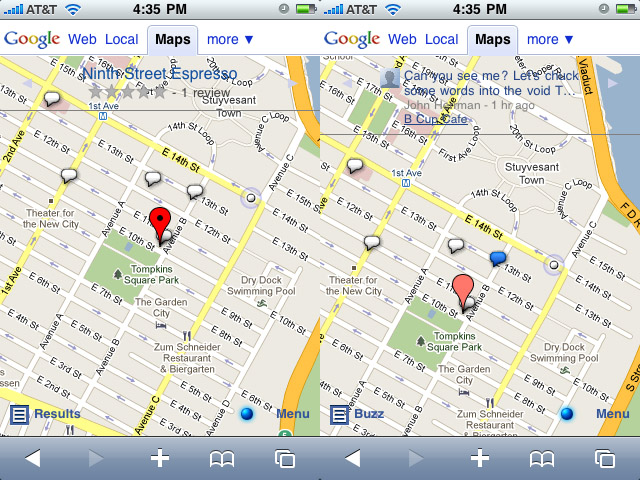 6. Now let’s check out the Buzz Map, which shows me all of the Buzz going on around. The overlayed text on top looks terrible, but it works surprisingly smoothly, with responsive pinch-to-zoom. Buzzes, or whatever they’re called, are the little chat bubbles you seeing hanging around me. Oh hey, Herrman again. And these other people. The easiest way to see what’s going on, ironically, is to stick with the list view, which presents nearby Buzzes as a stream.

Overall, it’s not very useful right now since not many people are using it, or at least saying anything worthwhile, but that’ll change. Ease-of-use and the interface, especially in maps, when there’s a million bubbles, needs to be massively improved, and at least on the iPhone it screams for a real app, not a web app—there’s a few times it’s made me wanna kill myself it was being so goddamn slow. One thing it could definitely use is a way to easily post photos from your phone. Also, could be annoying to get an email every time somebody comments on one of your buzzes.

So there you go, a cool guide on how to use Buzz.  If you’ve got an iPhone or an Andriod phone, give it a try.