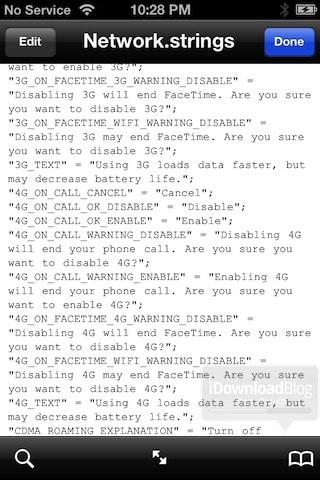 iOS  code has been commonly studied closely to see if Apple leaves any hints of the upcoming devices. This is based on the notion that Apple often adds software functionality in its OS before the hardware is shipped out. So developers can find hints in the source code. Whether or not that is true, new hints in iOS 5.1 code have been found which show that Apple may be planning to ship out an iPhone which 4G LTE in the coming days. This has been revealed through a series of commands in the iOS 5.1 code which are about 4G call switching when activating Face Time. This nearly certainly affirms that Apple may be working on such an iPhone which will come with 4G LTE.

And that does seem like the logical step for Apple to take in the next iPhone. 4G LTE is increasingly the new demand of the users. Users want to have the high-speeds that come with a 4G connection and this does contribute to the wild sales of the new iPad.

Now that the next release in line from Apple is the next-generation iPhone, rumors have been abound as to what specs it will tool and exactly when will it be unveiled. While that of course remains unclear, we can bank our hopes that it will come with 4G LTE.