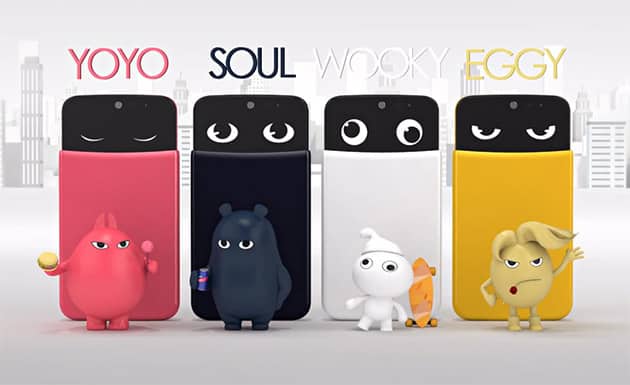 The four new smartphones that LG has introduced come in pink, blue, white and yellow color. The pink one is called YoYo, blue one – Soul, white one – Wooky and last but the not the least, yellow one is called Eggy. However, the phones’ inner components are a lot less colorful. Each AKA phone weighs 135.50 gram and runs on Android KitKat. Each phone packs 1.2 GHz quad-core processor, has a 5-inch HD display with 720 x 1280 pixels, an 8-megapixel rear and a 2.1-megapixel front camera, 1.5GB of RAM, 16GB of internal storage and a microSD slot that accommodates cards up to 128GB in capacity. The phones have front covers that envelope three-fourths of the screen and virtual eyes that match their personalities on the visible display. If users want to pretend their device has multiple personality disorder, what they have to do is to change the case. And the chip embedded in the back cover will change the phone’s eyes and personality, as well. However, each phone of AKA family costs 500,000 Korean won which is equivalent to $460. Now here comes the bad news for potential buyers who don’t live in Korea: these devices are only be available in LG’s native country, South Korea. It’s unknown if LG has any plan to ship these phones to the US and other locations. Here’s a video of these phones.

PureView Will Be A Part Of Future Lumia Devices, Nokia Confirms