iFixit’s Moto X Teardown Finds It To Be Highly Repairable

Moto X has been around for a while now and so far, the handset has attracted raving reviews. Although packing moderate hardware, Moto X’s design has wooed the hearts of many. The iFixit guys were quick to lay their hands on the handset and tear it down. Their final verdict is that Moto X is highly repairable. 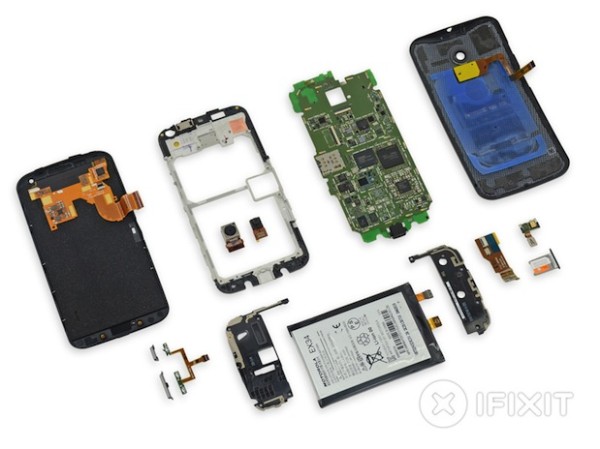 Typically, the iFixit team tears down nearly every new gadget to discern what lies under the hood. This is done to judge exactly how easily a handset can be taken apart and repaired. Finally, the team then accords a score out of 10, with 10 denoting most repairable and 0 denoting not repairable at all.

According to the iFixit team, the Moto X handset packs 16GB of eMMC NAND storage, inductive charging coils, camera modules at the front and the back, and finally a 3.8-volt 2,200mAH lithium-ion battery. The team further reveals that the handset uses the same type of screws throughout the body, which makes it a lot easier to open it up.

The battery of the handset is glued fairly firmly to the body. Moreover, a number of such adhesives have been used which are somewhat hard to undo. However, overall, Moto X makes use of these a lot less when compared to other handsets such as iPhone 5 and Samsung Galaxy S4.

In all, the iFixit team has accorded Moto X a score of 7 out of 10. Given iFixit’s conventional scoring measures, this is a really good score and it essentially means that Moto X is highly repairable. In other words, the handset has won yet another accolade for itself.

Turn Your SLR Into A Digital Camera With DigiPod

Moto Makers Options Will Be Available For Verizon Moto X