We have often seen that when internet in a device is connected via a router, the connection gets lost and few seconds later, it automatically gets reconnected. It’s really irritating to the person. Often the person gets angry for this. However, if the problem occurs because of router’s placement, then no worries anymore. A student has calculated the best place to fit a router and hence, the connection will not get disconnected anymore unless you manually do that.

As we know that the further away you are from the router, the tougher it’ll be to try to catch the tendrils of wi-fi signal. But if positioned properly, you can place your router in a spot that fills nearly every room of your house with beautifully oscillating waves of wifi. However, Jason Cole, who is doing PhD in Physics from the Imperial College London, UK, has gone through wi-fi connection problem and he sorted out the problem by his own too.

Whenever Cole uses internet on his mobile or computer/laptop/tablet via his router, the connection often gets disconnected, again it gets connected and this goes on every few minutes later. This was really irritating for Cole. So, he started to get rid of this problem and finally he figured out a formula that can work out the best place to position your wireless router, and it ultimately depends on your house’s floor plan. 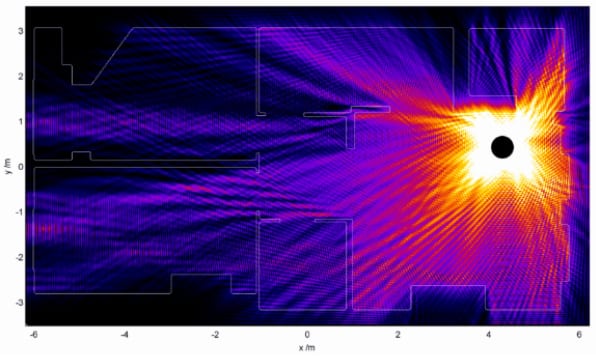 Cole first mapped his building’s floorplan, assigned the refraction values to the walls, and then used the Helmholtz equation, which allowed him to model the electromagnetic waves being emitted by his router. Cole mentioned on his blog Almost Looks Like Work that by following the Helmholtz equation, he came to a solution which he believed was correct. And by deploying the measurements from that solution, the internet connection now just doesn’t get interrupted anymore. If you want to see his calculation, click here.

Cole modified his router to take into account the absorption in wall materials such as concrete, and to stop perfect reflections forming a standing wave. This gave him a (router )model that looked much more like wifi signals and now he gets the best wi-fi signal. Apart from this, Cole has created an Android app that lets him map his own wifi signal around the house. Watch a video of the app in action below.

Source: The Daily Dot
Thanks To: Almost Looks Like Work