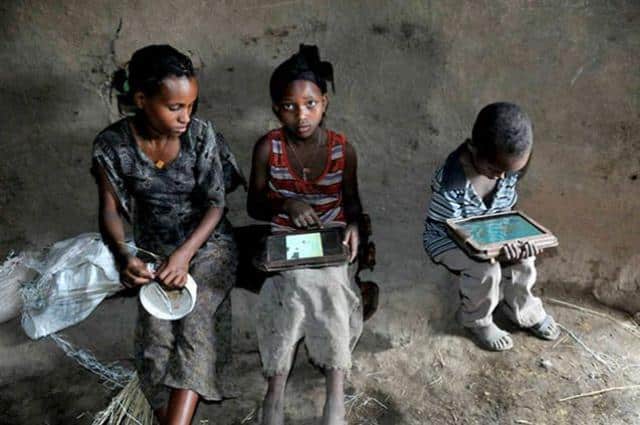 Its really tough to believe how intelligent today’s kids are. The Ethiopian kids who have no pre-knowledge also illiterate, don’t need any help or guidance from anybody to operate a tablet. Rather they can do that by their inborn intelligence. They even hacked the Android pre-installed system to suite their need, all by them-self just within months. At the beginning of this year the One Laptop Per Child (OLPC) organization conducted a very interesting experiment in two remote Ethiopian villages – Wonchi and Wolonchete. The organization dropped off some closed boxes that were contained with Motorola Xoom tablets powered by solar energy in that two villages. These tablets were pre-loaded with some educational programs and applications. The OLPC’s target was to see whether the illiterate kids who might have never seen a tablet and have no experience with written words can operate the devices or not.

Nicholas Negroponte, OLPC’s founder said, “I thought the kids would play with the boxes. Within four minutes, one kid not only opened the box, found the on-off switch … powered it up. Within five days, they were using 47 apps per child, per day. Within two weeks, they were singing ABC songs in the village, and within five months, they had hacked Android. Some idiot in our organization or in the Media Lab had disabled the camera, and they (the kids) figured out the camera, and had hacked Android. The kids had completely customized the desktop—so every kids’ tablet looked different. We had installed software to prevent them from doing that. And the fact they worked around it was clearly the kind of creativity, the kind of inquiry, the kind of discovery that we think is essential to learning. If they can learn to read, then they can read to learn.”

Sony Is Working On A Surface-Like Tablet