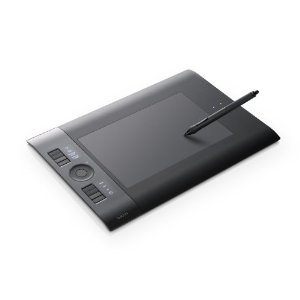 The new Intuos4 Wireless pen tablet with Bluetooth® wireless technology lets you relax in you favorite working position or move about freely up to 33 feet (10 meters) from your computer. Enjoy the freedom of working “unattached” from your Mac or PC and reducing cord clutter. Intuos4 Wireless is also an excellent choice for collaborative work session and client presentations as well as art education and training.This medium sized (wireless model available in medium size only) tablet provides ample workspace for most tablet users, while at the same time fitting easily into a laptop bag for mobile use.

The Intuos4 Wireless charges through USB and continues to work while charging.User-defined ExpressKeys activate frequently used shortcuts and modifiers, while the accompanying illuminated ExpressKey displays provide a constant reminder of each key’s function. 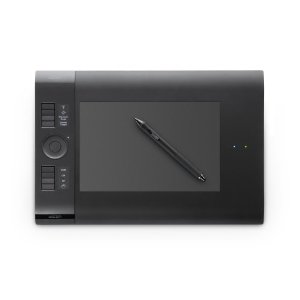 Like all Intuos4 tablets, the Intuos4 medium features Wacom’s new tip sensor technology delivering an even finer level of control. You can initiate pen pressure control with as little as a single gram of pressure and a feather-light touch. With 2048 levels of pressure sensitivity and 60 degrees of tilt recognition, the Intuos4 pen simulates the natural feel and accuracy of working with traditional brushes, pens, and markers like never before.

The finger-sensitive Touch Ring quickly controls up to 4 different functions such as canvas rotation, zoom, scroll and brush size. The Intuos4 Wireless brings a new level of freedom and natural pen control to digital photography, art, design, illustration and more.Bluetooth® Wireless Technology allows you to move freely up to 33 feet (10 meters) away from your computer. Works with Bluetooth® enabled computers including those enabled with most Bluetooth adapters. 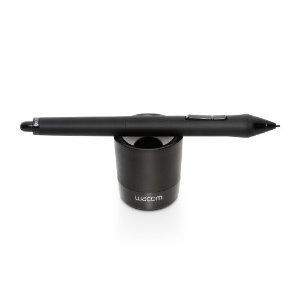 Simply plug the USB cable into the Intuos4 Wireless and your computer to recharge. You can continue using the pen tablet while it is charging.Featuring Wacom’s new Tip Sensor, Intuos4 now captures the slightest nuance of pen pressure, starting with as little as a single gram of force.

User-defined switches are preset to “right-click” and “double-click” or can be set to your most commonly used functions.With 2048 levels of pressure sensitivity, Intuos4 gives you the creative power to dynamically adjust exposure, brush size, line weight, opacity, and more by simply varying the pressure of the pen against the tablet. 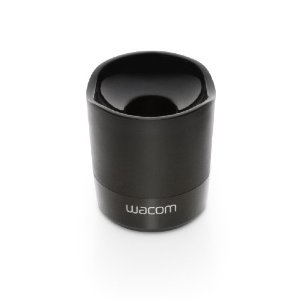 Intuos4 is the most comfortable Intuos tablet yet. The slim-profiled tablet has gently sloping, easy glide palm rests that provide complete support for working on all areas of the tablet.The Intuos4 Grip Pen features a new contoured barrel designed to minimize grip effort, reduce stress to your hand and wrist, and otherwise emulate the feel of your favorite writing instrument.

The new pen stand not only functions as a convenient pen holder, but also provides a handy twist-off storage compartment containing pen nibs and a pen nib removal tool.Set up your ExpressKeys to activate your own unique, time-saving shortcuts and modifiers in each of your applications. See your settings change in the illuminated display areas as you switch between applications. 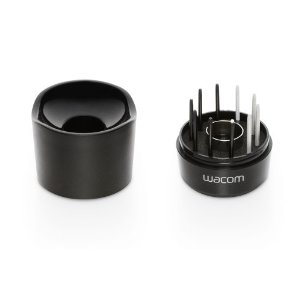 Optional pen holder (included) attaches pen to tablet for use away from the desktop.The finger-sensitive Touch Ring provides intuitive control of scrolling, zooming, brush size, canvas rotation or layer selection. A central toggle button allows you to control up to four different functions in each application.

Intuos4 owners are entitled to download their choice of one application from a selection of titles by industry leaders such as Adobe®, Autodek® and Corel®.The innovative, ambidextrous design of Intuos4 allows you to maximize the productivity of both your hands. Having the ExpressKeys and Touch Ring on the same side of the tablet ensures that they are perfectly positioned for use with the hand that is not holding the pen. 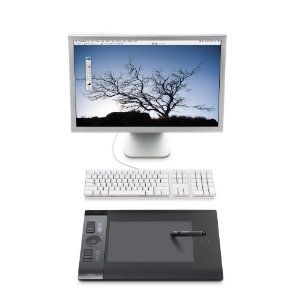 To complement your Intuos4, choose from a variety of accessories including the Grip Pen, the Classic Pen, Art Pen, Airbrush, Inking Pen, Pro Accessory Kit and more.