Our planet’s environment is changing for the worse, and each passing day is adding to its woes. We may simply refuse to realize it or ignore it when confronted with hard facts, but it is happening. To raise environmental awareness, Acrobotic Industries has launched a Smart Citizen kit project on KickStarter. 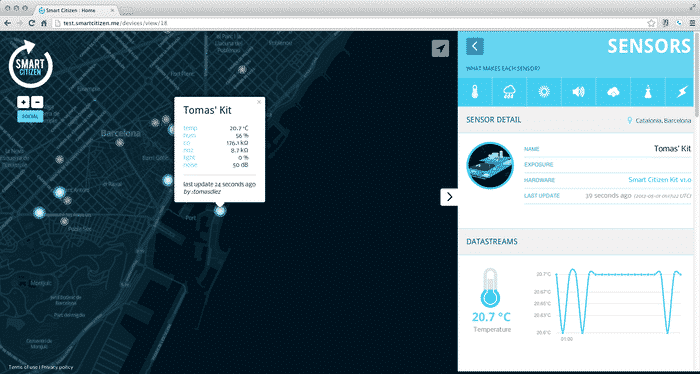 Acrobotic’s project is very unique in that it doesn’t aim to politicize the issue of environmental pollution. Rather, it wants to make the issue more personal for citizens around the world. The company is offering a kit which is to be installed inside a user’s home and allows the user to monitor a whole range of environmental indicators.

According to the COO of Acrobotic, Francisco Zabala, “I believe that climate is changing for the worse, but our approach is more personal. By raising awareness we’re working toward a solution without banging on people’s heads.”

For instance, once the users installs the kit inside their home, they are able to monitor temperature, air composition, humidity, air density, sound levels and many other factors. The kit helps in educating users and keeping them aware of the environment they are breathing in.

The kit is made up of an Arduino computer which has been fitted with a range of sensors. Acrobotic hopes that once a huge number of users install the kit in their homes, the company will be able to discern the environmental data from around the globe and keep tabs on it in real-time. Such direct information can be a huge asset for those trying to curb environmental pollution.

If you wish to lay your hands on one of these kits, you can sign up for it at the widget provided below. For now, the kit is going to cost you $155, which isn’t too steep for something that lets you keep tabs on so many environmental indicators. The company aims to raise $500,000 in pledges before going forth with the mass-production of the kit.

Playing Dots Can Make You Smarter