Swedish researchers are working on an underwater kite that could provide a low-cost and low impact method for tapping into the energy of the ocean. Swedish start-up Minesto has obtained $2.5 million to start testing the kite in Northern Ireland next year. The kite, called Deep Green, is able to capture tidal energy at 10 times the speed of the water in which it operates.
It consists of a 3-foot-long turbine attached to a rudder and a 39-foot wingspan, tethered to the ocean floor with a 330-foot cable, according to CNN. 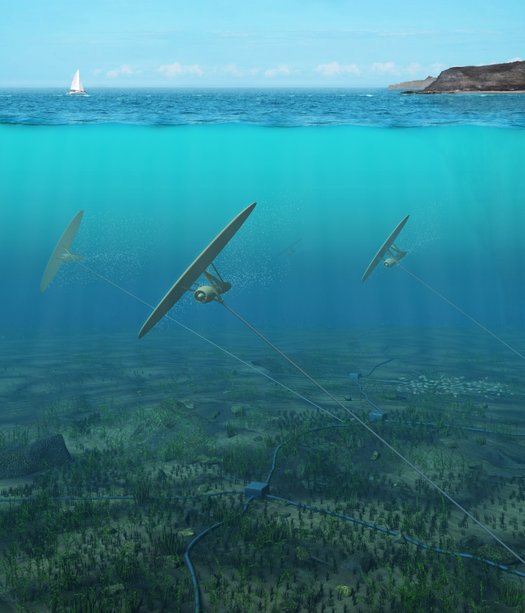 The turbine rotates quickly and doesn’t require a gear box, making it lighter and cheaper than other alternatives, according to Minesto representatives. The key is the tether — anchoring and steering the kite allows it to capture much more energy. The kite travels 10 times faster than the water it operates in, resulting in 1,000 times more energy, the company says.

China Emerges As The Leader In Clean Energy Investment…

There are currently a variety of tidal energy systems on trial around the world, but according to the Energy Systems Research Unit at the UK’s University of Strathclyde there are just two main methods employed.

One is tidal barrages, which use technology similar to that found in hydropower stations, while tidal stream systems — like Minesto’s “Deep Green” — use the motion of the tide and work in a similar way to wind power generation.

Luke Blunden, a researcher at the Sustainable Energy Research Group at the UK’s University of Southampton, is optimistic about tidal power’s prospects.

“Tidal energy has the winning feature of being predictable — in time particularly — which makes it inherently more valuable,” Blunden told CNN.

“Although it is more expensive, I think its reliability will win out in the end. It’s not a [total] solution, but it will be part of the energy mix.”

LED Art Project Will Light Up San Francisco’s Bay Bridge For $30.14 Per Night