With a population of about 22.2 million residents in the National Capital Region of Delhi, India it is difficult to catch people who are committing crimes in real-time. Now the Delhi police are using the help of citizens on Facebook to find criminals…..

How many times have you witnessed a bad piece of driving but not been able to do anything about it? Many, I’m guessing. But if you’re in Delhi you now have a means to take action. Facebook.

Facebook is taking over the world. And it’s not just being used for communication, photo posting, sharing links, and playing lame social games such as FarmVille and Mafia Wars. In fact, in India, it’s being used as a virtual traffic cop. And it’s getting results.

I never thought I’d see the day when police work was crowdsourced to the residents of a social networking site. But it’s happened, with The New York Times reporting how police in Delhi, the capital of India, are using Facebook as a means to catch bad drivers on the crisscross maze of roads running through the city.

Two months ago, Delhi traffic police set up a Facebook page intended to be a place for two-way communication between officers and residents. The people of Delhi responded in their droves, by informing on their fellow citizens. As of Aug. 1, 17,000 people were fans of the page, 3,000 photos had been posted, and 665 tickets have been issued to drivers as a direct result.

Two months ago, Delhi traffic police set up a Facebook page intended to be a place for two-way communication between officers and residents. The people of Delhi responded in their droves, by informing on their fellow citizens. As of Aug. 1, 17,000 people were fans of the page, 3,000 photos had been posted, and 665 tickets have been issued to drivers as a direct result. 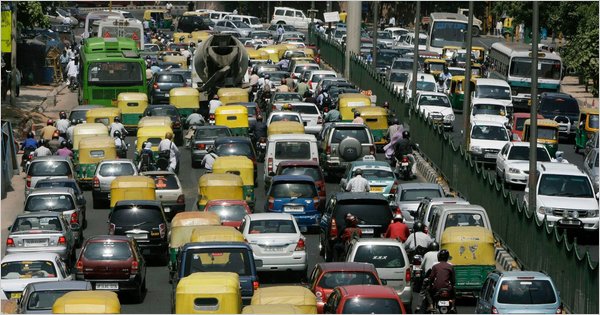 Through these pictures, about 665 tickets have been issued to people who drove without helmets, drivers using cellphones, and cars stopped in crosswalks.

Delhi has 12 million residents, and just 5,000 police officers assigned to the traffic division. Four of those are now working full-time on following up incidents reported via Facebook.

Offenses caught on camera and passed on to police include motorcyclists not wearing helmets, cars parked illegally, illegal maneuvers, and people using their cellphone at the wheel of a vehicle.

In order to be brought to justice, the offender’s license plate has to be clearly on show. But that hasn’t stopped many people criticizing this as an Orwellian measure that sets a dangerous precedent.

In the actual city of Delhi, there are 12 million people and 5,000 traffic officers. The Delhi Traffic Police does realize that photos can be manipulated so anyone who gets caught can argue against the tickets. The police also suggested not to antagonize people into breaking the law. About four officers monitor this page around the clock now. These officers also posts information about closed roads and traffic jams.

I can see both sides of that argument. But a more obvious issue has to be of the abuse that could take place. It’s very easy to doctor a photo these days, so who knows if the incidents being reported actually involve those being blamed by their accusers?

Steps To Fix Purple Screen Problem When Jailbreaking with JailbreakMe 2.0