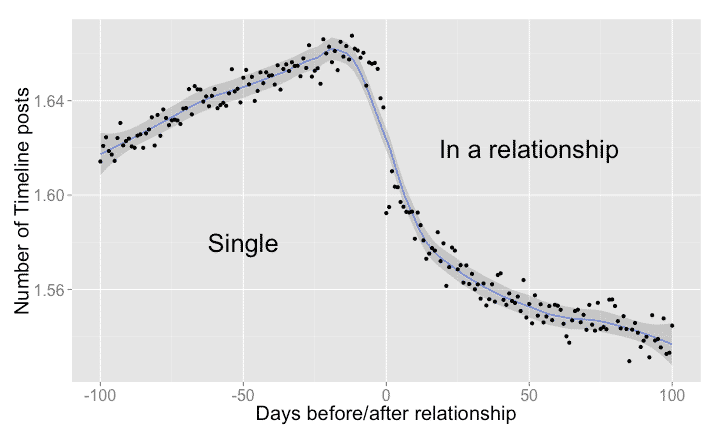 Given the sheer amount of our personal, everyday data that Facebook has, it is no wonder that the social network can even predict when a Facebook user is about to enter a relationship. The company has now revealed the behind-the-scenes science of this. The social network has released a study, coinciding with the Valentine’s Day, which divulges how Facebook knows when two individuals are about to enter a relationship. Apparently, in the three months leading to a new relationship, the number of posts by two persons on each other’s timeline starts to increase significantly.

This number reaches the highest average 12 days before the relationship. Once the relationship is announced, status is changed on Facebook and things become official, the number of posts start to decline. The official blog post explains this in the following words, “Presumably, couples decide to spend more time together, courtship is off, and online interactions give way to more interactions in the physical world.”

Another very interesting metric shows that although the number of interactions decrease after a relationship is announced, the frequency of sweet words such as ‘love’, ‘happy’ etc begin to increase. An average graph posted below shows that there is a significant spike in the use of such terms as soon as an individual enters a relationship. The most expressive users, when it comes to saying ‘I love you’ are users from Israel followed by those in Sweden, Norway and Spain. Users from Montana, Idaho and Nebraska in U.S. are least expressive in terms of the use of such sweet terms.

You can read the official blog post as well as an entire 6-part series on the science of love on Facebook.