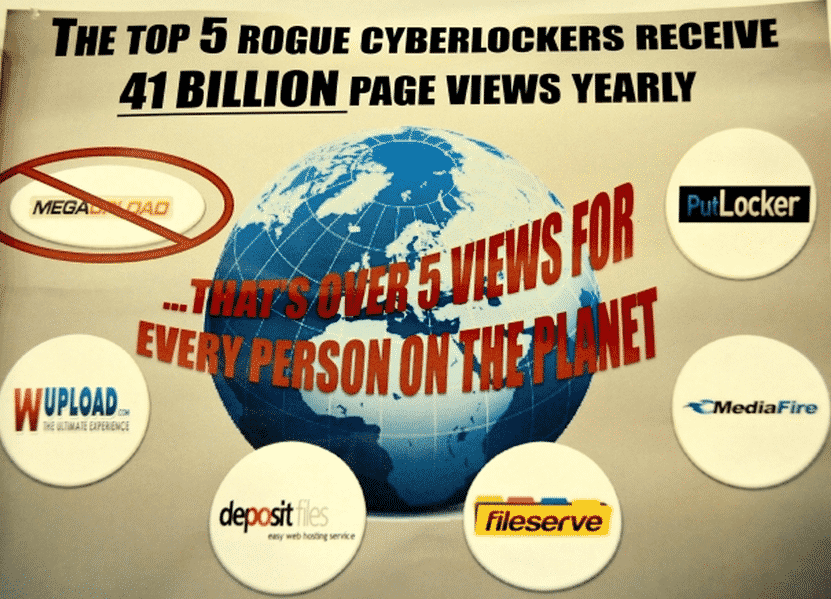 Copyright owners have been engaged in a battle since long time against online piracy. They are looking for a way to shut down the latest iteration of illegal file sharing. This illegal file sharing is called ‘Cyberlockers.’ Recently, Paramount Pictures have identified top 5 rogue cyberlocker sites. These cyberlocker sites generate page views. These 5 file sharing server (sites) have more than 41 billion page views yearly. Through this, Cyberlockers are earning huge amount of money each year.

Film studios and major music labels want to vanish some forms of Internet piracy for criminal occurrence. Large media companies claimed that there are many trafficked cyberlocker sites that has the existence because of the piracy. Alfred Perry, vice president for worldwide content protection at Paramount Pictures mentioned 5 rogue cyberlocker sites name during a panel discussion at the On Copyright conference on 30 March. These 5 sites are : FileServe, MediaFire, Putlocker, Depositfiles and Wupload. Perry did not confirm whether those 5 sites are under any kind of investigation or face criminal prosecution or not. These 5 cyberlocker sites have been charged for pirating music, movies, TV shows, videogames, and other media. Mostly they did the piracy from MegaUpload. According to the Motion Picture Association of America (MPAA) and the Recording Industry Association of America (RIAA), some of the top cyberlocker services are operated by outlaw gangs and are just part of a larger criminal enterprise. But, according to our earlier reports, MegaUpload is not that much clean.

Is it FileServe, MediaFire, Putlocker, Depositfiles and Wupload are going to be closed? Till now, everything is indistinct. We have to wait for the answer. Stay with us. We will notify you when we come to know. For more details, you can click here.