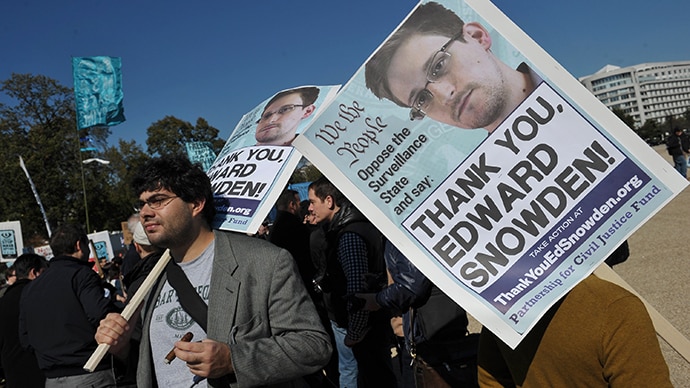 Edward Snowden continues to be hailed for his heroic efforts in unveiling NSA‘s illegal and unconstitutional surveillance. He and Laura Poitras have now been awarded the 2014 Ridenhour Prize for Truth-Telling. Snowden, who has been a former intelligence contractor, was able to gather extensive data revealing how NSA monitored and stored immense amounts of digital data for surveillance purposes. He then blew the whistle on these unconstitutional surveillance efforts and leaked key relevant documents to journalists Glenn Greenwald and Laura Poitras.

Poitras has a long career of being an accomplished documentary-maker and a journalist. She was the first journalist who was able to contact Snowden and helped him unveil the treasure-trove of information leaked from NSA. She received the Ridenhour Prize as a recognition for her efforts in working with Snowden to unveil government surveillance.

Explaining their decision, the committee said, “We have selected Edward Snowden and Laura Poitras for their work in exposing the NSA’s illegal and unconstitutional bulk collection of the communications of millions of people living in the United States. Their act of courage was undertaken at great personal risk and has sparked a critical and transformative debate about mass surveillance in a country where privacy is considered a constitutionally protected right.’

It is interesting to note that a number of awards have been received by the journalists who aided Snowden in blowing the whistle. Not only that, The Guardian being the very paper which blew the lid off the storm has also received prestigious awards for its decision to take a daring stand and sparking a critically important debate.

U.S. government, however, continues to treat Snowden as a hostile person. Rather than appreciating him in bringing the utterly baffling surveillance operations of NSA to light, the government has launched criminal prosecution against Snowden. This has forced the former NSA contractor to live in Russia in exile.