UK users are waking up to a ton of new content courtesy of Google and the YouTube rental service previously only available in the U.S. and Canada. With over 1,000 titles to choose from, the service will offer 48 hour retails ranging from £2.49 to £3.49 and it’s of course available via the Movies link in the upper right of YouTube, but is also accessible through Google TV, Android tablets and certain smartphones running Honeycomb, which in short, Google has been building its movie ambitions incrementally…………………… 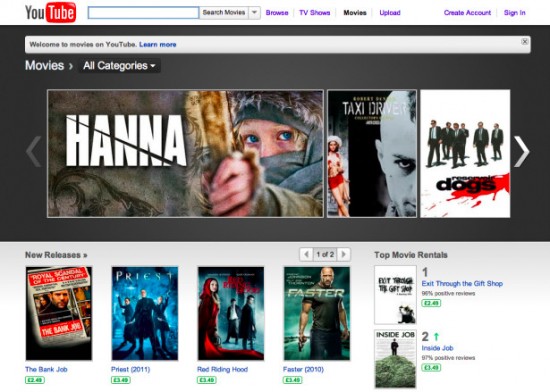 YouTube has launched its movie rental service in the UK with thousands of blockbusters including The Dark Knight and Reservoir Dogs and film fans in the UK can now rent new releases for £3.49 and older titles for between £2.49 and £3.49 from YouTube. The move puts the Google-owned site in direct competition with Amazon’s LoveFilm, which claims some 1.6 million customers in the UK and Europe. LoveFilm makes new releases available to non-members for between £2.49 and £3.49 a film. Viewers will be given a 30-day window to watch their film on YouTube and 48 hours once they have started viewing it. YouTube has signed UK-specific deals with Hollywood film companies including Sony Pictures, Warner Bros, Universal and Lionsgate. The website has also signed deals with Revolver Entertainment, the British studio behind Talihina Sky: The story of Kings of Leon and Metrodome. The UK becomes only the third market where YouTube has launched its movie rental business, after the US and Canada. YouTube launched its US video-on-demand service in May as part of its shift away from short, low-quality clips that made the site so popular. YouTube is by far the busiest video website online with more than 100 million unique monthly viewers, according to figures released by web metrics firm Nielsen in June. The launch of the UK movie rental service follows longstanding deals with broadcasters, including Channel 4 and Channel 5, who make their programmes available on the site.