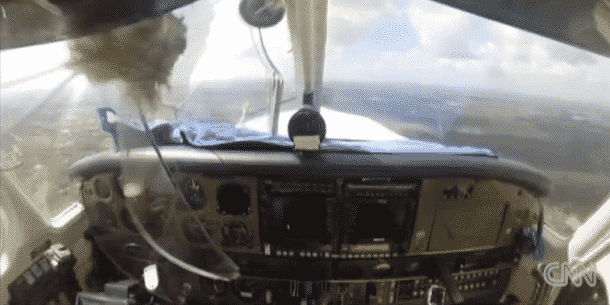 We often hear about birds crashing into the windshield, wings or engine of a plane. This time, there’s a video to show how it feels like when a bird smashes into a 170mph plane. The footage was caught by a camera in the cockpit of the plane. Rob Weber, the pilot who was in the cockpit, didn’t see the bird coming. It smashed straight into the windshield, hung there for a second and then came in with the debris of the windshield.

Weber was flying towards Page Field in Fort Myers. He later told NBC 2 about the incident, “You’re sitting there waiting for a bird to come in. Never did see him. All of the sudden the window just explodes. I don’t know if he was diving or what happened when I got him.”

He incurred a cut on his forehead from the windshield debris and was visibly shaken, as seen in the video, when the bird smashed into the plane. But he was able to get a handle on his nerves and landed safely. However, he did say that in his 11 years of flying career, this was only the second time he ever used the ‘mayday‘ term.