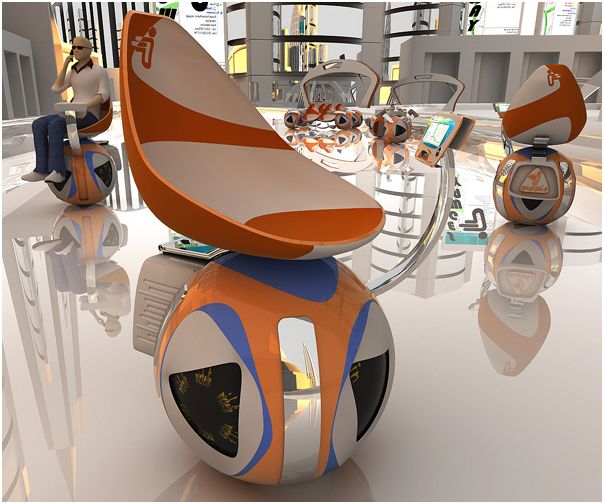 Supple is one such exemplary electrically powered chair concept that features spherical wheel for seamless movement in any direction. It is basically an automated, self propelled personal transport chair. Maybe, but they probably don’t move fast enough. It’s actually kind of like a Transformer, since it can be used in different configurations. This was part of one of the entries in the Michelin Design Challenge, one that’s best left as a concept. This Wall –E chair is a brainchild of a 19-year old Iranian mechanical engineering student Mohamad Sadegh Darounkolayi. It is designed for Michelin Challenge Design, a creation of Michelin North America, Inc., which is an annual celebration of creativity in vehicle designs to publicize and promote such innovative ideas. Mohamad has been working on the electric car designs in the industrial designing for past two years and Supple is his latest creation. The beaming engineering student is definitely proud of his own creation.

The Supple is an AGV (Automatically Guided Vehicle). A person who is in the chair need not even stand up; forget about walking to get something. All he has to do is point his finger to the required destination on the console’s GPS and you are there. No wonder, ‘Supple’ reminds us of the famous animation picture Wall – E. Why, we may also compare it with Aladdin’s Genie as well, wish for something and your wish will come true!

The wonder machine ‘Supple’ is balanced on a globe wheel, which is in turn controlled by a tow server motor with a single processor, which enables the vehicle to move in any direction, without any effort from the driver’s side. The machine is designed such that half of it is a tow server while the other half comprises of a super computer and processor. The chair could have been primarily meant for the indoor use and less prone to rainfall, which is incorporated with a set of wireless guidance technology, where the rider needs to choose the destination on GPS using touch screen control, the sit back and relax, while the Wall E chair takes care of the rest. The Supple’s wheels slide out from under the globe and acts like an (albeit round) end table. It can combine with its counterpart to form a two-seater with two wheels like a motorcycle, when combined with four such counterparts, it can form a four-seater sorts. It can navigate through the traffic, as it is capable of moving in all the directions, front, back, left, right and can loop when required.
This design is still a prototype, but when it comes out and hits the road, people are bound to become lazy oafs and lethargic. Even if the designer sees this concept as a future transport model.