Whale Dives For More Than 2 Hours, Breaks Record For Holding…

Apparently, the whale skull is from a baleen whale — a toothless filter-feeder. It is six feet long and weighs 1,000-pound. This whale scull has been found on the Potomac River shore of Virginia’s Stratford Hall Plantation — the birthplace of Confederate Gen. Robert E. Lee. But the rest of the skeleton is still buried in the cliffs. 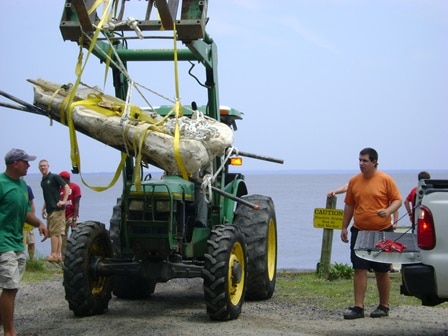 Unfortunately, officials of Calvert Marine Museum are not sure whether it is really a skull of baleen whale or not, so they will examine the entire skeleton within the next couple of weeks to be sure. But, looking at the size of whale skull, museum officials believe that the whale “would have been 25 or more feet long.” At present, museum officials are trying to retrieve the rest of the creature’s remains. Here’s a video of the excavation.

Source: Calvert Marine Museum
Thanks To: The Washington Post

The World’s Most Powerful Non-Destructive Magnet