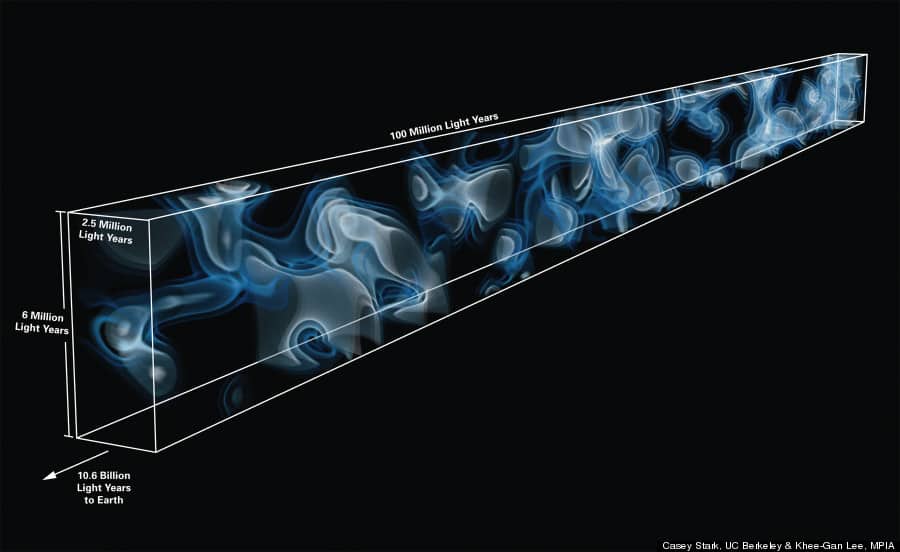 The Earth is filled with outnumbered hidden and mysterious things. We have already seen a map hinting thousands of mountains lying under sea. And now it seems like there are more things in this universe than our imaginations. Lately, an international team of astronomers has created first 3D map of hidden universe. The astronomers used a powerful new computer algorithm and observational data from the 10-meter Keck I telescope (one of the biggest telescopes in the world) atop Mauna Kea volcano on Hawaii’s Big Island. Using these, they have created a luminous 3D map of the universe as it was just 3 billion years after the Big Bang (calculation says the universe is now 13.8 billion years old). However, the first 3D map of hidden universe is called “Lyman-alpha tomographic” map which gives an unprecedented look at the cosmic web — the vast galaxy-containing filaments that form the backbone of the universe. To create the map, the team used the telescope to pick up light from galaxies more than 15 billion times fainter than the faintest stars visible to the naked eye.

Dr. Khee-Gan Lee, a postdoctoral researcher at Germany’s Max Planck Institute for Astronomy said, “The prevailing wisdom was that gargantuan 30-40 meter diameter telescopes of the future will be required to collect enough signal to make this kind of map. But we definitely see distinct and coherent cosmic web structures in our map rather than ‘static’ like one might get from a bad television signal. The giant future telescopes will allow us to make higher-resolution versions of this map but it’s exciting to try out the technique already.”

The map is more than just a thing of beauty. The astronomers hope it will yield more information about how the cosmic web functions — the way that gas in deep space is funneled into distant galaxies. The team has described the research in the journal The Astrophysical Journal Letters.

Ethical Gene Selection In The Embryos Is A Moral Obligation, Oxford Academic Claims