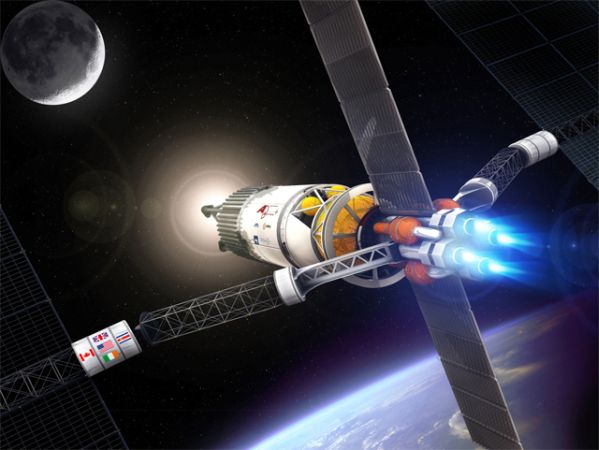 Ad Astra Rocket Company and NASA Johnson Space Center (JSC) have signed a Support Agreement to collaborate on research, analysis and development tasks on space-based cryogenic magnet operations and electric propulsion systems currently under development by Ad Astra. The agreement was signed on March 2, 2011 by NASA-JSC Director of Engineering, Mr. Stephen J. Altemus and Ad Astra’s Chief Executive Officer, Dr. Franklin R. Chang Diaz.The Support Agreement is the fourth entered into by the parties under an Umbrella Space Act Agreement, executed in December of 2007. That document established the basic framework for collaboration and serves as host to support agreements, such as this one, that define specific tasks and objectives to be accomplished over a certain period.

NASA will work with a firm started by a former astronaut to build a spaceworthy plasma drive capable of revolutionising travel beyond Earth orbit. However it appears that the space tests may not take place aboard the International Space Station (ISS) as had been planned.Ad Astra Rocket Company, headed by Dr Franklin Chang Díaz. has already built an experimental prototype version of its Variable Specific Impulse Magnetoplasma Rocket (VASIMR). The VX-200, (VASIMR eXperimental 200 kilowatt) unit works fine in a vacuum chamber on Earth. Now Ad Astra has announced an agreement under which it will work in partnership with NASA to produce the VF-200 flight version, which has long been planned for installation aboard the International Space Station.The VASIMR works by squirting stuff out of its exhaust just as a normal rocket does: the difference is that it does so much more violently, hurling its argon reaction mass out as a plasma hot as the interior of the Sun and moving at better than 50 kilometres per second. This means that VASIMR gets a lot more poke out of a given mass of propellant than ordinary chemical rockets possibly can: though unlike them it needs electrical power to work.

The VASIMR isn’t any use for getting into space in the first place as its power-to-weight ratio is small: the VX-200, the size of a small car, can only produce enough thrust to lift half a kilogramme or so off the ground.A normal rocket will burn up any practical amount of fuel very quickly: thus it can be used only in brief bursts. A spacecraft driven by such means must spend almost all its time coasting along unpowered. Thus a journey to Mars for instance, would take 6 months for a conventional spacecraft.A VASIMR, however, can keep on exerting its relatively tiny push for weeks on end without using any more juice, gradually boosting a ship up to terrific speeds that would never be possible with a chemical rocket. VASIMR ships could get to Mars in just 39 days.

Short for Variable Specific Impulse Magnetoplasma Rocket, VASIMR works with plasma, an electrically charged gas that can be heated to extreme temperatures by radio waves and controlled and guided by strong magnetic fields. The magnetic field also insulates any nearby structure, so temperatures well beyond the melting point of materials can be achieved. The plasma can be harnessed to produce propulsion. In rocket propulsion, the higher the temperature of the exhaust gases, the higher their velocity and hence the higher their fuel efficiency. Plasma rockets feature exhaust velocities far above those achievable by their chemical cousins, so their fuel consumption is extremely low.

The station is a good fit for VASIMR as it has vast solar-panel arrays the largest ever placed in space and thus there is considerable electrical power available on board, up to 250 kW. The station could muster enough juice at times to run the VF-200 at full bore and really try it out properly.But now we learn that the VF-200 may not in fact go to the station, but instead fly in some other flight platform. This could be bad news for a really comprehensive test programme, as today’s spacecraft don’t have enough juice to really put a 200 kW machine through its paces. Even powerful communications satellites don’t generally dispose of more than 15 kW or so. A large, costly (and correspondingly heavy, thus expensive to launch) solar array would probably be required for any free-flyer non-ISS option.

The other option for long-term power generation in space is nuclear, but this too is so far quite limited in output. Soviet radar-ocean-reconnaissance satellites carried Topaz reactors which could generate several kilowatts of electricity: they were the most powerful nuclear units so far flown. US nuke boffins have developed a space reactor, the SAFE-400, that could produce 100kW of electricity (two of these and the VF-200 could easily be lifted right up to geosynchronous transfer orbit by a SpaceX Falcon 9) but it has never been used.The fact is that even the launch of comparatively simple and low powered radioisotope-decay power units (as opposed to reactors proper) often draws a lot of technofear protest, and the bureaucracy and expense associated with spaceflight-rated nuclear technology is immense. Chang Díaz has always suggested – in common with most serious analysts – that flight beyond Earth orbit, or anyway beyond the Earth-Moon system, can’t ever become a serious activity without the use of nuclear power. Even so, his chances of getting a nuclear powerplant for the inaugural VF-200 trial flight would seem slim.

Man Never Leaves His Dream : A Dutchman Flaps His Arms And Flies Like Birds

NASA Cuts Budget From Other Projects To Focus On Mars