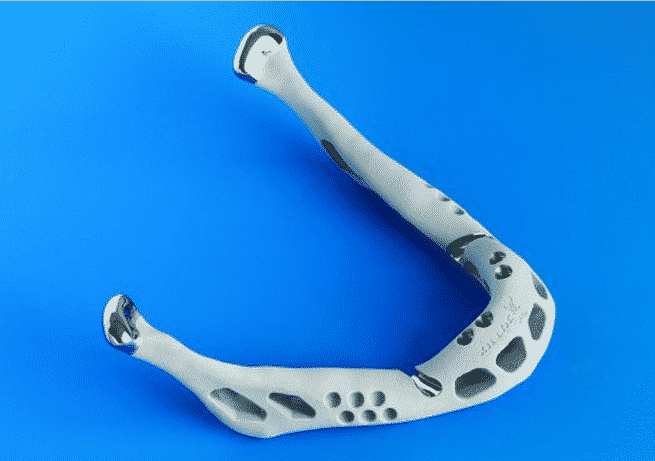 For the first time in the history of the world, a 3D printer created lower jaw of mouth has been successfully fitted to an 83 year old woman’s face, who is a European octogenarian. The artificial jaw was made from Titanium powder. This successful operation occurred in June, 2011, in Netherlands: but mysteriously more than 8 months later, it’s been revealed to public. The 83 year old lady is absolutely fine. This operation will help for the use of more 3D printed patient specific parts in future. The 83 year old woman was suffering from osteomyelitis, a chronic bone infection. It almost destroyed her entire lower jaw and therefore she was unable to chew and speak. It was even tough for her to breathe. As the infection was spreading rapidly and traditional reconstructive surgery was too risky considering her age, so doctors had no choice left except for artificial implantation. Finding no other way, doctors and 3-D printing engineers designed an entirely new jawbone to fit the patient. This method was developed by Research Institute BIOMED at Hasselt University, which is in Belgium, in cooperation with more surgeons of the Orbis Medical Center Sittard-Geleen and companies Xilloc Medical BV, Maastricht and Cam bioceramics BV of Leiden. Doctors took an MRI scan of the woman’s face to determine the shape of the artificial jawbone and transmitted the information to the 3D printer. The 3D printer built up the implant layer by layer. A computer controlled high-precision laser was used to ensure the correct molecules to be fused together in layers. It took 33 layers of titanium powder particles to build just one millimeter. It means, the whole jaw was consisted of thousands of layers. Later, the jaw was coated in a biocompatible ceramic layer. The jaw weighs 107 grams, which was one-third heavier than her previous jaw. Professor Dr. Jules Poukens of Hasselt University, who led the surgical team said, “The new treatment method is a world premiere because it concerns the first patient-specific implant in replacement of the entire lower jaw. Shortly after waking up from the anesthetics the patient spoke a few words, and the day after, the patient was able to speak and swallow normally again. Computer technology will cause a revolution in the medical world. We just need to learn to deal with. In the future doctors and engineers together to design computer and the operating table. This is really innovative.” Ruben Wauthle, of LayerWise, said, “You can build parts that you can’t create using any other technique. For example you can print porous titanium structures which allow bone in-growth and allow a better fixation of the implant, giving it a longer lifetime. 3D printing could reduce costs of medical treatment, because operations are quicker and recovery time is shorter. There are still big biological and chemical issues to be solved.”

Replacing the jawbone through artificial implantation took only 4 hours. But if the operation was done in classical micro surgical reconstructive method, then it would take 20 hours (5 times than artificial implantation). As the 3D printed jaw fitted the patient perfectly, the woman was able to speak and swallow normally. Though the healing process took a bit longer, but later it went absolutely fine through the appropriate antibiotics. The lady was released to go to her home 4 days later.

Scientists hope that, one day this technology will be able to print human tissues and organs as well as bones. Moreover, this surgery is less costly than usual surgery and saves times. Let’s see, how much popularity it gets from human.