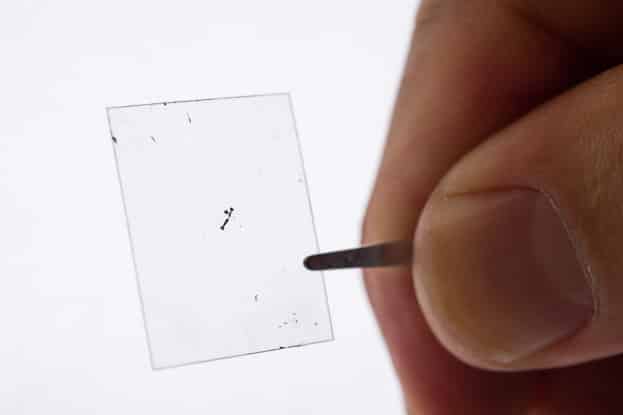 Scientists also found that as the number of layers increased, the amount of current generated decreased, until eventually the material got too thick and stopped producing any electricity at all. They also found that when one-atom-thick layers of MoS2 were put into arrays, together they were capable of generating a large amount of electricity.

James Hone, professor of mechanical engineering at Columbia engineering and co-leader of the research, said in a press release, “This material – just a single layer of atoms – could be made as a wearable device, perhaps integrated into clothing, to convert energy from your body movement to electricity and power wearable sensors or medical devices, or perhaps supply enough energy to charge your cell phone in your pocket.”

However, this new electrical generator is an example of piezoelectricity, or electricity that is generated from pressure. Piezoelectric materials have huge potential to be used to create materials that can charge devices. But until now, scientists have struggled to make these materials thin and flexible enough to be practical. Now scientists have predicted that a substance capable of forming single-atom-thick molecules, or two-dimensional layers, would be highly piezoelectric.

It is important to be noted here that the generator is made from molybdenum disulphide (MoS2), which is a clear, flexible and extremely light material that opens up huge possibilities for the future of electricity generation. Scientists have published the results of their research in Nature. For more details, hit the links below.

Source: Georgia Institute of Technology
Thanks To: Popular Science

The Next Century Holds Many Disasters And Droughts – Climate Forecast