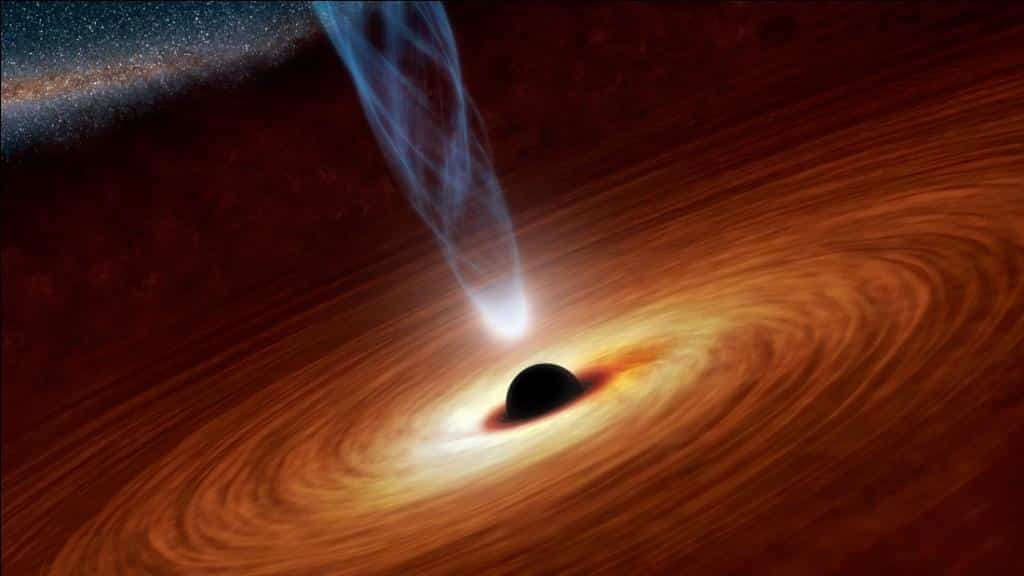 A black hole is an object — typically a collapsed star — whose gravity is so strong that its escape velocity exceeds the speed of light. In other words, black holes suck everything around them, even light which has a speed of 186,000 miles per second in vacuum, can’t pass through it. Since nothing is known to exceed the speed of light, nothing can escape from a black hole. So is there any chance that the Earth will be a prey of it? Let’s find out. Black holes are black and invisible. They can be big or small. Scientists think the smallest black holes are as small as just one atom. These black holes are very tiny but have the mass of a large mountain. Note that, mass is the amount of matter, or “stuff,” in an object.

According to scientists, the smallest black holes have been formed when the universe began. On the other side, stellar black holes (another kind of black holes which usually have a mass of up to 20 times more than the mass of the Sun in space) are made when the center of a very big star falls in upon itself, or collapses.

Although black holes can’t be seen because strong gravity pulls all of the light into the middle of the black hole, using satellites as well as telescopes, scientists can see how the strong gravity affects the stars and gas around the black hole. When a black hole and a star are close together, high-energy light is made. This kind of light can not be seen with human eyes. Scientists use satellites and telescopes in space to see the high-energy light. Besides, scientists can study stars to find out if they are flying around, or orbiting, a black hole.

Earlier we reported that astronomers have discovered a giant black hole that doesn’t swallow all things in space. We also reported that NASA might have found a new black hole in our galaxy. But as the space is mysterious and dark, latest telescopes in space often fails to bring the mystery of the black holes into light. Therefore, NASA has already launched a telescope into space that’ll illuminate black holes.

It is quiet clear that everything is set to study black holes. Now the question is, if black hole can devour light, then there’s a chance that one day, it will devour Earth and other planets too. Well, the interesting thing is black holes don’t go around in space eating stars, moons and planets. Therefore, Earth will not fall into a black hole.

Besides, no black hole is close enough to the solar system for Earth to do that. Even if a black hole having the same mass as the Sun takes place of the Sun, Earth still would not fall in because the black hole would have the same gravity as the Sun. Therefore, Earth and the other planets would orbit the black hole as they orbit the Sun now.

For your kind information, let me inform you that the Sun will never turn into a black hole because Sun is not a big enough star to make a black hole. And if you support Stephen Hawking and his theories, then you never need to worry as he has said, “there are no black holes.”