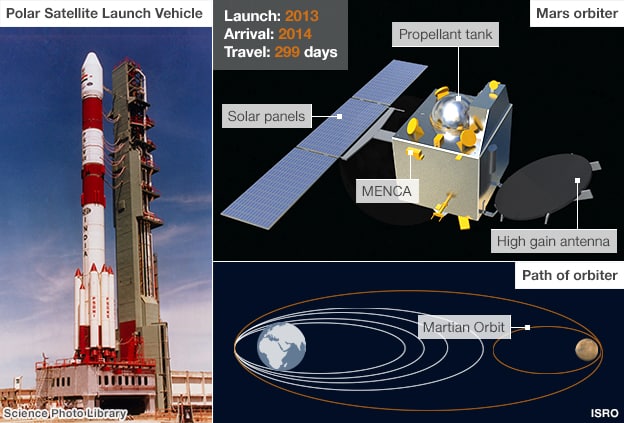 ISRO’s PSLV C 25 (through which the spacecraft has been sent to space) successfully injected the 1,350-kg ‘Mangalyaan‘ Orbiter (Mars craft) into the orbit around the Earth. During the maneuver which is being called Trans-Mars Injection (TMI), the spacecraft’s 440 Newton liquid engine was fired for about 22 minutes. At then, the velocity of the spacecraft was 648 meters per second. This is India’s very first maiden mission to Mars and the mission is called Mars Orbiter Mission (MOM).

However, after the successful placing in Mars transfer trajectory, ISRO Chairman K. Radhakrishnan said, “Everything went of well. We took stock of the spacecraft’s health and everything is normal. We just had a meeting with all the ground controllers and mission directors who briefed us on the spacecraft’s systems and all are working well.”

Note that, for studying the Mars, MOM is equipped with 15 kg (33 lb) of instruments including a Lyman-Alpha Photometer(LAP), which is an absorption cell photometer that measures the relative abundance of deuterium and hydrogen in the Martian upper atmosphere and will be used to determine the rate that Mars loses water to space; a Methane Sensor for Mars (MSM), which measures methane in the Martian atmosphere in parts per billion; Mars Exospheric Neutral Composition Analyzer (MENCA), which is a quadrupole mass analyzer to study the composition of the upper atmosphere, a Thermal Infrared Imaging Spectrometer (TIS) that will map the temperature of the Martian surface; and the Mars Colour Camera (MCC) that will be used to study the surface features and composition of Mars and its moons Phobos and Deimos.

Mangalyaan Orbiter is now on a course to encounter Mars and it is being continuously monitored from the Spacecraft Control Center at ISRO Telemetry, Tracking and Command Network (ISTRAC) in Bangalore with support from Indian Deep Space Network (IDSN) antennae at Byalalu. As per calculation, the spacecraft will reach to the Martian orbit on September 24, 2014 after a journey of about 10 months around the Sun.

Source: ISRO
Thanks To: The Hindu