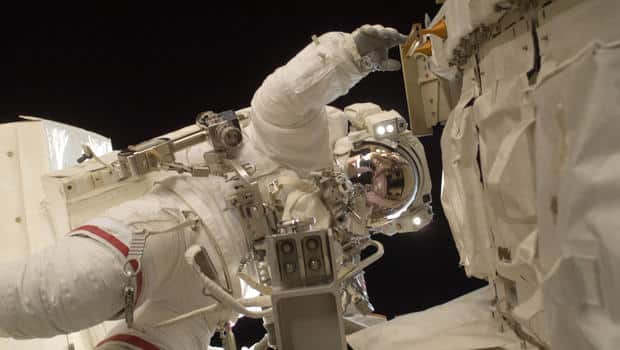 In space, technical or mechanical problem in spacecrafts may occur anytime. If the problem is mechanical, then some astronauts may have to come out of the spacecraft and fix that problem. Lately, a cooling line at the International Space Station (ISS) has been leaked and to fix that, two American astronauts will be sent into space this weekend. As a safety precaution, NASA has developed snorkels, (the pipe through which people breathe under water) for those astronauts, if ‘just in case’ their helmets fill up with water while repairing the cooling line.

On July 16, during a spacewalk outside the ISS, Luca Parmitano, a flight engineer and an ESA astronaut from Italy, was about to die as water was leaking into his helmet and clinging to his head in zero gravity, making it impossible to hear or be heard over his radio headset. Thanks to American astronaut Christopher Cassidy, who saved Parmitano’s life by taking him back to an airlock before the water could cover his nose and mouth. Such unexpected incident taught NASA a bitter lesson.

However, lately a cooling line at the ISS has been leaked and for this leakage, several systems at the ISS has been shut down. The shut down systems are really important for ISS to work properly. Therefore, NASA has decided to send two of its American astronauts: Mike Hopkin and Rick Mastracchio into the space to fix that leakage. But, who can guarantee that while fixing that leakage and investigating why the leakage occurred, water will not enter into their helmets and lead them to death. Therefore, as learned from earlier bitter lesson, this time NASA has taken extra precaution for the astronauts. NASA has developed snorkels for the astronauts, if ‘just in case’ their helmets fill up with water while repairing the cooling line in space.

The snorkels are made from a length of spare plastic tubing with the end smoothed down and wrapped in Velcro to keep it in place. The snorkels will provide the astronaut with a clear breathing path if the fault reoccurs and water leaks in again. Besides, at the back of astronauts’ helmets, there will be absorbent pads that will absorb any water that floats in. Note that, the astronauts have been trained to sense when the pad becomes “squishy” due to excess moisture. Here’s a video for you that explains the spacewalk and the suit modifications.