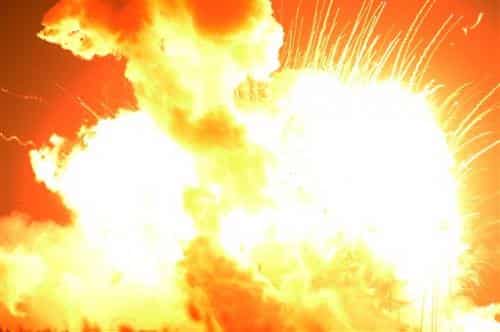 Antares, an unmanned commercial supply rocket of Orbital Sciences, bound for the International Space Station (ISS) exploded moments after liftoff, with debris falling in flames over the launch site in eastern Virginia. No injuries were reported following the first catastrophic launch in NASA’s commercial spaceflight effort. The rocket was carrying a meteor tracker and 32 mini research satellites, along with numerous experiments to ISS. However, it blew up over the Orbital Sciences Corporation’s launch complex at Wallops Island, just six seconds after liftoff. There was no hint of any trouble until the rocket exploded and this was the second launch attempt for the mission. The company said everyone at the site had been accounted for, and the damage appeared to be limited to the facilities.

Michelle Murphy, an innkeeper at the Garden and Sea Inn, New Church, Virginia, where launches are visible across a bay about 16 miles (26 kilometers) away, witnessed the explosion. He said, “It was scary. Everything rattled. There were two explosions. The first one we were ready for. The second one we weren’t. It shook the inn, like an earthquake.”

While rocket explosion is quite rare, but such accident at Orbital Sciences Corporation’s launch complex has drawn criticism over the space agency’s growing reliance on private US companies. Why? Because, NASA pays billions of dollars to Orbital Sciences and the SpaceX company to make station deliveries, and it also counts on SpaceX and Boeing to start flying US astronauts to the orbiting lab as early as 2017.

However, after the explosion, NASA spokesman Rob Navias said that there was nothing on the lost

https://www.youtube.com/watch?v=jHMmMgdcOSUflight that was urgently needed by the six people living on the space station. Here’s the video of the explosion.

Source: PhyOrg
Thanks To: WSJ