Saturn is the sixth planet from the Sun and the second largest planet in the Solar System, after Jupiter. Lately, NASA’s probe Cassini has spotted a strange object at the edge of Saturn’s rings. Many astronomers are suggesting this strange object could be the beginning of a new moon.

NASA launched Cassini in 1997 and the spacecraft arrived in the orbit of Saturn in 2004. Since, Cassini had been studying Saturn and its rings and moons. Earlier we have seen Cassini capturing colorful photos of Saturn and its largest moon, Titan. However, the ringed planet already has at least 150 moons and satellites of various sizes, ranging from Saturn’s largest moon Titan, which is even larger than the planet Mercury, to many tiny moons less than 10km across. Until now, 62 moons have been discovered in orbits around Saturn, and 53 of them have been officially named.

But British scientist professor Carl Murray of Queen Mary University of London, has spotted a strange object in one of Saturn’s rings when poring over 107 images on from Cassini. Murray named that strange object ‘Peggy.’ Cassini accidentally captured Peggy on April 15 while focusing on Prometheus, an inner satellite of Saturn. Since Murray was analyzing the images on April 19, the same day as his mother-in-law’s 80th birthday, he named the object after her. 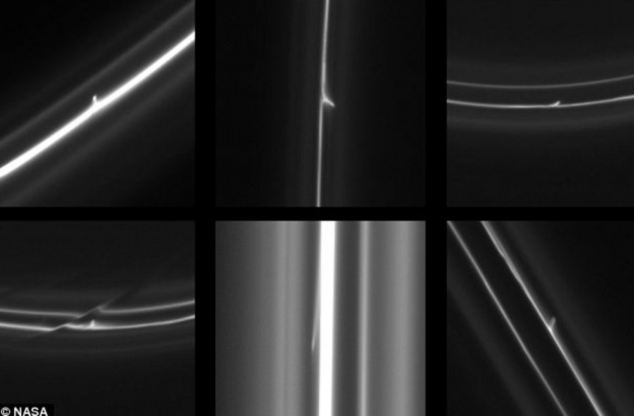 Peggy is “too tiny” (just 0.6 miles or 1 km  in diameter) to see directly and is creating ripples at the edge of the planet’s ring. Experts claim that it is “too small” to develop into a moon or even moonlet. Scientists state that Peggy could be the result of the accumulation of ring material that must have collapsed under its own weight due to gravitation as moons that orbit near the rings usually form this way, creating a ring of dust first and then gathering additional material to grow.

On the other side, the Cassini team is scheduled to initiate a probe into Peggy to determine its true identity. They will be closely observing the status of Peggy after January 2014.