Steve Jobs had most probably envisioned a voice-controlled TV when he said that he had finally cracked the nut of next-generation TV devices. Now, this once-dream is fast becoming a reality. A number of TV vendors are now planning to include voice-commands in their devices and just now, Google jumped the bandwagon, at least in theory. Google has patented a new technology that enables a user to control Google TV through voice commands. 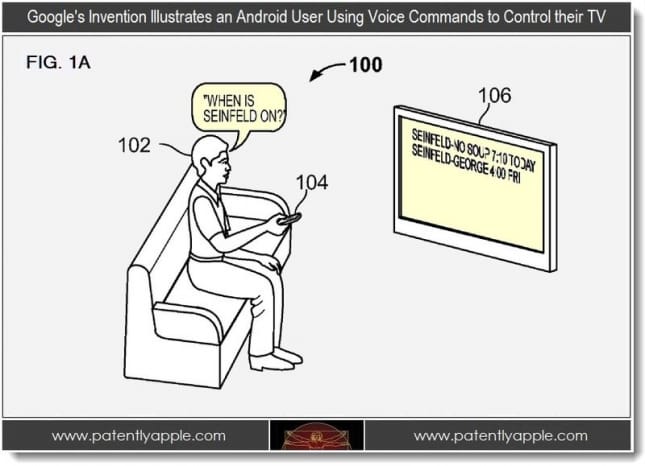 According to this patent, a user can control Google TV by giving voice commands through a smartphone app. These voice commands can be used to control a set-top box, a television or any other device which is equipped with Google TV.

But that is not it. Apparently, Google also intends to add features so that the TV would automatically detect the presence of a user nearby and turn on and then switch to the user’s most-watched channel. This is a remarkable possibility. According to the patent’s documents, “the provision of the query to the television may occur when the user is within a set distance of his home also (e.g., by determining with GPS functionality on the smartphone that he is within 1/4 mile of the home), and the television may be turned on automatically as he approaches the home, with the television tuned to a channel that is determined to be most relevant to the query.”

Although the rest of the features are more or less what many vendors are planning to implement right now, the GPS-enabled user-detection can be a novel edge for Google. The new voice-commands technology can also be applied by the users to set up playlists and play music on Google TV. So far, this is just a patent from Google and when we may expect an actual product in which this technology has been implemented is hard to state.

The New Google TV Interface is Available on Logitech Revue

Logitech Learns A Bitter Lesson From Google TV Based Revue

Logitech Revue Got Price Drop To $99