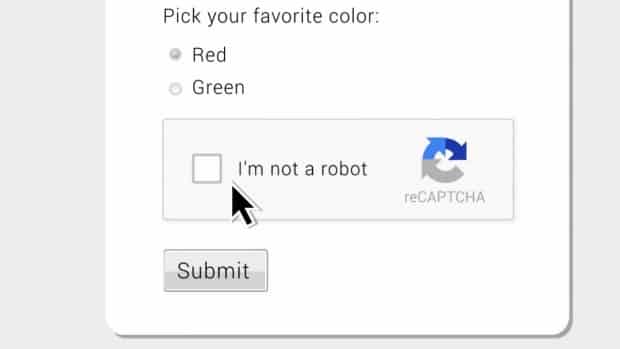 The CAPTCHA is a familiar sight to any Internet user who’s ever had to log in anywhere on the Web. It’s supposed to be simple – you correctly punch in some random squiggly, generated words to prove you’re not a robot, and then presto, you’re in. But sometimes the letters or symbols in given in a most scribbled way that you can’t even understand it. And now, to get ride of this problem, Google has announced an improved version of CAPTCHA. “NoCAPTCHA reCAPTCHA” this is what Google is calling its improved version of CAPTCHA. This new service has some great benefits for users. The new API simply offers a checkbox that says “I’m not a robot.” When you tick the box, Google performs a number of seamless checks using a “risk analysis engine” to determine if you’re human or not.

If the noCAPTCHA thinks you are a human, you’re done and there are no more steps; it’s really that easy. And if noCAPTCHA thinks you are not a human, you’ll be asked to fill in either a traditional CAPTCHA or a more advanced one, like picking the right image from a series of images. Google says this is much easier for mobile users, who can just tap on the option rather than squint at a tiny image.

Google has made this reCAPTCHA available to anyone who’d like to use it. Regarding this noCAPTCHA reCAPTCHA technology, Google said in its blog, “Distorted text, on its own, is no longer a dependable test. To counter this, last year we developed an Advanced Risk Analysis backend for reCAPTCHA that actively considers a user’s entire engagement with the CAPTCHA—before, during, and after—to determine whether that user is a human.”

Here’s a a demo video of noCAPTCHA reCAPTCHA.

Robotic Rings : New Way Of Entertainment For All