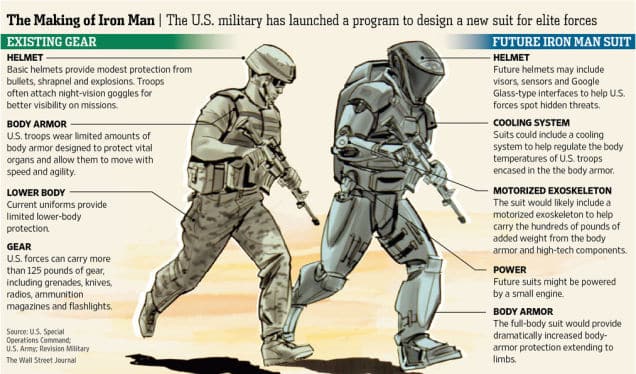 The Iron Man style combat suit that US Army is trying to build is called Tactical Assault Light Operator Suit (TALOS) that may weigh as much as 400 pounds. The TALOS will be equipped with advanced armor, efficient power systems and integrated medical monitoring/treatment system. It will provide effective protection of the head and extremities. In addition, the suit will have a weapon and it’ll provide bullet protection, monitor vitals, and give its wearer superhuman strength and perception. TALOS will also include passive or low-powered exoskeletons to improve strength and endurance of the individual soldier. Situational awareness and C4 (Command, Control, Communications, and Computers) capabilities might be incorporated into TALOS. Besides, greatly enhanced medical diagnostic and treatment abilities will also be integrated into TALOS.

Some giant companies such as Lockheed Martin, General Dynamics and Raytheon as well as some small companies are helping the US Army to build TALOS. Although the US Army hasn’t announced the total budget for making this suit, we have come to know that $10 million has already been spent on this project.

The US Army has planned to build a basic version of TALOS within three years and it would like to deploy the suit as soon as 2018. Here’s a demonstration of TALOS.

Source: WSJ
Thanks To: io9

Google Is The Most Popular Tech Company In US, Polls Say

Americans May Spend Over Thirty Billion Dollar This Weekend