Netflix announced that they have reached a multi-year licensing agreement with DreamWorks Animation SKG Inc. and the online streaming movie and television subscription service will have the first-run exclusive of feature films and certain TV specials from the production company. Under the contract, which replaces a similar pay TV pact between Dreamworks and HBO, Netflix will begin offering exclusive access to the studio’s new films in 2013 and the company won’t be confined to selling digital copies of Dreamworks’ movies within a specific period. Dreamworks drawing a major distinction between itself and HBO, which requires studio partners to halt digital sales outside of an exclusive window and thid deal is for Netflix members to enjoy instantly watching high-quality animated Ccontent from DreamWorks Animation……………. 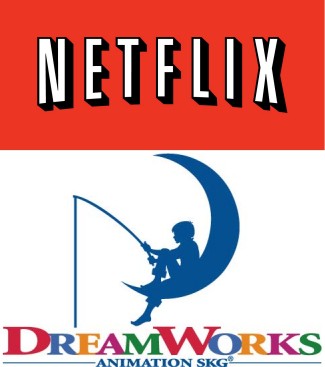 Netflix Inc. and DreamWorks Animation SKG Inc. announced a new multi-year licensing agreement that will make Netflix the exclusive subscription television service for first-run feature films and select television specials from DreamWorks Animation, the award-winning creators of such beloved franchises as Shrek, Madagascar, Kung Fu Panda and How to Train Your Dragon. Beginning with its 2013 feature films, new DreamWorks Animation titles will be made available for Netflix members to watch instantly in the pay TV window on multiple platforms, including television, tablet, computer, and mobile phones. Under the agreement, certain critically lauded and commercially successful DreamWorks Animation catalogue titles, including Kung Fu Panda, Madagascar 2, Chicken Run and Antz, among others – will also be made available to Netflix members over time. “DreamWorks Animation is one of the few family entertainment brands that really matters. The studio is brilliantly creative, technologically innovative and incredibly successful at making films and TV shows that delight people of all ages,” said Ted Sarandos, Chief Content Officer of Netflix. “This agreement strengthens the lineup of great family content Netflix members will be able to watch instantly and also increases the number of hit first-run films we’ll have available in the pay TV window.” “Netflix has emerged as an innovative brand with an impressive track record for attracting high-quality content providers to its service and we look forward to making DreamWorks Animation titles available to over 24 million Netflix members in the U.S.,” said Jeffrey Katzenberg, Chief Executive Officer of DreamWorks Animation. “This arrangement allows us to get more value for our content while giving us a greater degree of flexibility in how we distribute it across multiple platforms in today’s evolving digital world.”