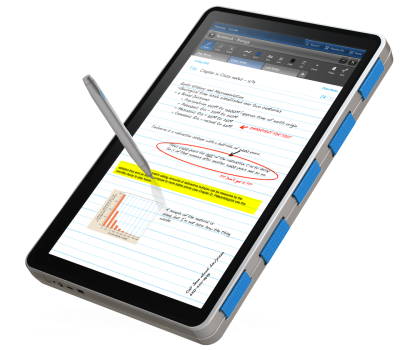 Huge, heavy reference tomes are still a major part of modern study and research. If you’ve ever wished that those textbooks in front of you could come to life and offer a more engaging experience than just reading through reams of text, then the Kno could be what you’re looking for. Weighing in at 5.5 pounds, the dual-screen electronic textbook will offer students access to a wealth of published educational material as well as wireless access to the internet and multimedia content such as high definition video. Just like with its paper cousin, the Kno will also allow for note-taking, highlighting and bookmarking.

If you were bummed when Microsoft pulled the plug on it’s Courier project, you might be interested in the Kno, another dual-screen e-reader/tablet that debuted at All Things Digital’s D8 conference yesterday.

The Kno is a new twist on the tablet and e-reader concept, aimed at the college market; it allows students to view textbooks on two digital screens much as they would view them in their analog versions, with text, color images and graphics.

As the fledgling e-reader market continues to diverge into more form factors and feature sets, a start-up called Kno is rolling out a new tablet PC specifically designed for displaying school textbooks and academic reference materials.

The Kno is a multi-dimensional two-screen tablet that could lighten your bag — and change the face of textbooks. Amid the bevy of other devices joining the Amazon Kindle and the Barnes & Noble nook in the e-reader ring, Kno’s clamshell-style tablet stands out as particularly well targeted to meeting the needs of its intended users – in this case, students.

Although much bigger players such as Apple and Amazon haven’t yet managed to capture the e-textbook space, Kno plans to succeed by tuning the features of its device to the real world functionality required.

At the start of the development process, the creators of the Kno wondered why digital textbook technology was slow to enter the seat of learning. In talking to students, they discovered that although convenient, digital readers didn’t offer the kind of tactile and visual interaction that physical books did. Simple things like the ability to see two large pages at once, annotate and highlight or leave sticky notes on important passages or even placing a finger at a particular part of the text whilst looking up something else, were all lacking to varying degrees in electronic text readers. The Kno is a big device, having two 14.1 inch (1440 x 900) capacitive touch screens. Each screen has its own battery, giving the Kno 8-hours of battery life, but a hefty weight of 5.5 lbs (I suppose all that glass contributes to the weight as well). As a point of reference, the iPad weighs 1.5 lbs and people complain it’s too heavy. On the other hand, the Kno is so big that you’d probably lay it on a desk to use it. And the target audience is students; if Kno (the company) has its way, students will be carrying around a Kno (the device) rather than a stack of textbooks. That’s the reason for the huge screens; most textbook pages can be shown ‘full size’ on a 14″ screen. Five and a half pounds doesn’t seem so bad compared to a backpack full of textbooks.

This configuration is geared towards providing students with a textbook-like page display rendering “the complex layouts designed by authors” without the need for scrolling, but also lends itself to the creation of completely new educational tools. To this end, the company has arranged a beta program with four higher education publishers, including McGraw-Hill Education, to provide select content for upcoming trials in major U.S. universities and colleges.

Rashid and the other company co-founder, Babur Habib, have entered into early partnerships with McGraw-Hill (MHP), Pearson and Wiley, and Cengage Learning (CHC-WT), a sign that resources are already at hand for delivering textbook and reference materials on the Kno e-reader.

After stepping to the stage at the conference in New York City, Rashid and Habib unloaded a set of hefty textbooks from a typical student backpack, telling the audience that they seek to replace those heavy tomes with their lightweight, 5.5–pound ebook reader.

The Kno will support multiple e-Reader formats of course as well as popular document types such as PDF and cater for highlighting, bookmarking and note-taking. WiFi and Bluetooth wireless connectivity add potential for cloud-based study, immediate reference checking and high definition multimedia interactivity too.

Inside the Kno is a Tegra 2 chip and 16 GBs of storage space. It runs a browser based OS running on embedded Linux that sounds almost like Chrome OS in some ways. Engadget, who got some hands-on time with the device, says “the entire experience is essentially a WebKit instance.” Price is still up in the air but Ina Fried at CNET says the company is aiming for a price well under $1000. After stepping to the stage at the conference in New York City, Rashid and Habib unloaded a set of hefty textbooks from a typical student backpack, telling the audience that they seek to replace those heavy tomes with their lightweight, 5.5–pound ebook reader.

About 95 percent of school textbooks will display well on the Kno, according to Rashid, who believes that other efforts at e-textbooks have failed because their screens were too skimpy.

Compared with an iPad, the Kno feels large and heavy. But Mr. Rashid said to compare it instead with a 20-pound backpack containing textbooks, notebooks and a laptop. Mr. Rashid said the company had deals with several large publishers, including Pearson, McGraw-Hill Education, Cengage Learning and Wiley, to make their texts available.

Further information on the Kno will be revealed when the device enters the student beta program later in the summer, which is also when pricing will be confirmed.

AirVideoEnabler For All iOS Apps