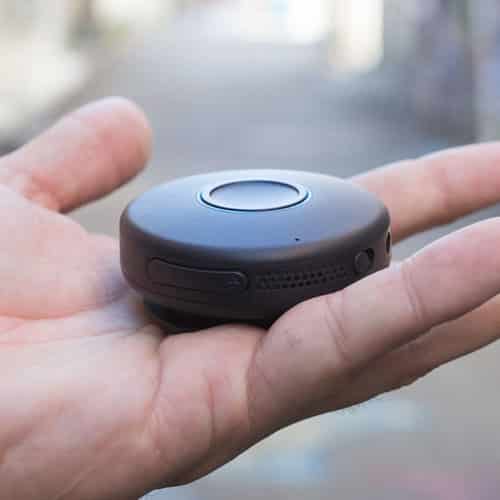 The Onyx is real-life ‘Star Trek‘ communicator which means it’s more like a walkie-talkie, but you can set up a communication beyond any geographical limitations. The hardware startup OnBeep presents ‘Onyx‘ is probably the most familiar that to what Captain Picard used to wear on his suit in Star Trek: The Next Generation as we have seen till now. The device works as hand-free walkie-talkie for live communication. Without using any kind of radio or cell phone, Onyx has made it easier to communicate with person or a group of people.

For the primary level, Onyx costs only $99 and is able to run within its own network. It has to be connected to a smartphone via Bluetooth and it will work if your smartphone has data connectivity, that could be on cellular networks or Wi-Fi networks. Physically, it is 2.5-inch round and looks like a clip. It has a button in the mid-point for preparing the communication, a volume rocker, power switch and a mute switch. There is a multicolored LED ring around the main button which changes color based on availability. For example, Blue means available, Green indicates user is talking and Yellow is mute.

The Onyx connects to other Onyx units through its iOS app or Android app. There is no limitation of how many people can join in one particular group. But OnBeep recommend not to have more than 15 people in a group as it can get unwieldy. As we already mentioned, it’s compatible with iOS device and Android device as well. Introductory rate for one Onyx is only $99, but you can buy a pair for $195. Pre-order is open on online but the device will be delivered later this year.