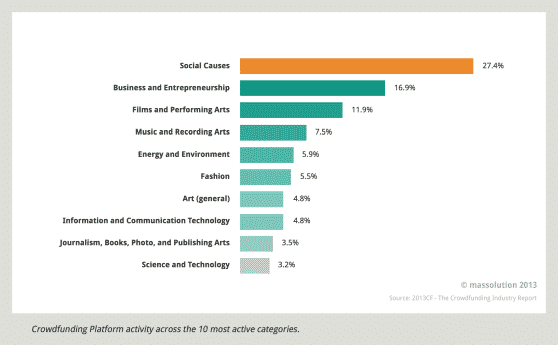 We have seen many amazing and interesting projects materializing through one of the most popular crowd-funding sources, Kickstarter. Massolution, a research firm specializing in the crowd-sourcing and crowd-funding industry has reported that in 2012, a total of $2.7 billion fund was collected through 308 active crowd funding platforms (CFPs) worldwide! According to Massolution, more than one million campaigns successfully funded in 2012. Besides, collecting a total of $2.7 billion in 2012 was an 81 percent increase over 2011. Massolution also reported that of those $2.7 billion funding, 27.4 percent of crowdfunding money came for social causes, 16.9 percent came for business and entrepreneurship, and 11.9 percent came for films and performing arts. Massolution said, North America and Europe were the two regions in 2012 that most invested in crowdfunding — accounting for 95 percent of the $2.7 billion. North America raised $1.6 billion, while Europe raised $945 million.