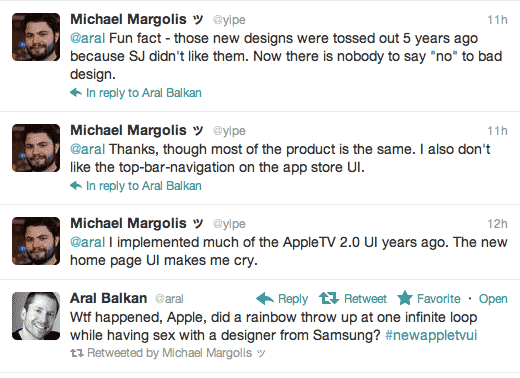 The current user interface in the new Apple TV has attracted mixed reviews from the users. Some have deemed it refreshing while others have complained that it is unable to access different services. Now, a former Apple engineer has stated on his Twitter account that the current UI of Apple TV is the very same he created five years ago and that it was rejected by Steve Jobs. Steve Jobs has been known as someone who strived for perfection and wanted Apple’s products to be the best on the market. So this isn’t much of a surprise coming from a former Apple employee. Michael Margolis formerly worked at Apple as Apple TV UI developer. According to him, he had created the same UI five years ago which is being used in the current Apple TV model.

Margolis said that since the design was his creation, ‘the new home page UI makes me cry.’ Margolis certainly didn’t like the idea of the company trashing his UI initially and then going on to use it eventually. But perhaps he does give an answer to why so happened. ‘Now there is nobody to say ‘no’ to bad design.’

The new design is not really bad, though when we try to look at it from Steve Jobs’ point of view, the design isn’t very perfect either. Nonetheless, Apple tweaked it up a little and launched it, so that means that company deemed it good enough to be a part of an Apple product.