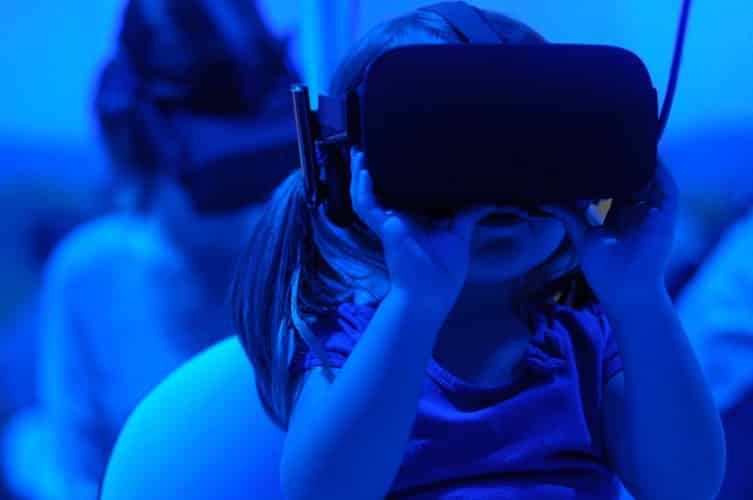 Can we get something productive out of this? Every kid’s face would lit up in joy when he gets to try a VR set. So, can we actually use this as a fun technique to teach them new skills? Actually, we can! VR headsets are fun and also educative! Which makes it a very good tool for spending quality time with your kids.

This game is a great tool for inspiring creativity and imagination in kids.

The aim of this game is to get the Pink ball to the Pink goal! But how are you supposed to do that, you guessed it right, by building an effective contraption.

This game is a perfect tool for kids to observe different work environments such as Kitchen, Garage Space, Office Space, and Store. Kids can walk around and observe the environment of an actual workspace in the virtual.

However, it isn’t actually that serious of a game as it sounds. It is silly which makes it double fun to play and learn.

As kids, we all liked to paint. And the fun part was we were not trying to mimic anything, we just chalked down random shapes, filled them with random colors. Unfortunately, we did not have the blessing of VR when we were kids! But now we do!

With tilt Brush, your kids can actually paint across your living room without getting paint on any physical object! With this app, your kids can learn about the entire human anatomy in the virtual. Learning from the book is one thing, but getting to touch them, or at least getting a 3D projection through a VR headset is much more enlightening.

Let’s be honest, no parent would allow their little kids to play a game that involves zombies, enemy soldiers or dragons! In straight words, that isn’t educative at all.

And trust me, this game will not cause any nightmares. The Candy Kingdom is a shooter game but it is suitable for kids. How? It is actually a whimsical carnival ride with a very colorful and lit up surrounding. Furthermore, it actually has a very funky background music to it.

Have you tried any of the VR apps mentioned above? Then share your thoughts with us. In the meantime here is a quick blog on Must-Have iPhone Apps For Fun AR Experience!