Ford partners with Toyota to share technology, for developing new hybrid system for trucks and SUVs. So the journey begains towards a new way of Automobile technology. Ford And Toyota signed a memorandum of understanding today that shows equal partners to create a new rear-wheel drive hybrid platform intended for light trucks and SUVs. The product development collaboration, with the formal agreement expected by next year. By this collaboration they expected to offer even better telematics services in the future. Checkout more details bellow in the press release. 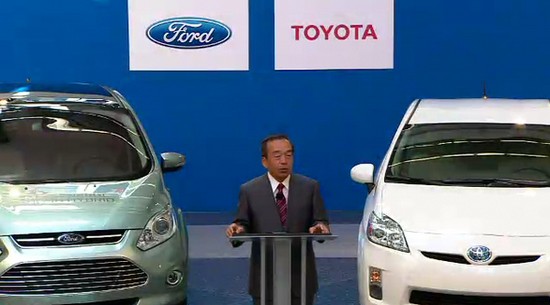 · New co-developed hybrid system ready for use later this decade on Ford and ToyotaXYZrear-wheel-drive light trucks and SUVs, delivering greater fuel efficiency while still providing
customers the capability they want and need

Ford and Toyota have signed a memorandum of understanding (MOU) on the product development collaboration, with the formal agreement expected by next year.

Both companies have been working independently on their own future-generation rear-wheel drive hybrid systems. The two now have committed to collaborate as equal partners on a new hybrid system for light trucks and SUVs. This new hybrid powertrain will bring the full hybrid experience of greater fuel efficiency to a new group of truck and SUV customers without compromising the capability they require in their vehicles. Ford and Toyota believe that their collaboration will allow them to bring these hybrid technologies to customers sooner and more affordably than either company could have accomplished alone.

“This agreement brings together the capability of two global leaders in hybrid vehicles and hybrid technology to develop a better solution more quickly and affordably for our customers,” said Derrick Kuzak, Ford group vice president, Global Product Development. “Ford achieved a breakthrough with the Ford Fusion Hybrid, and we intend to do this again for a new group of truck and SUV buyers – customers we know very well.”

Takeshi Uchiyamada, Toyota executive vice president, Research & Development, said: “In 1997, we launched the first-generation Prius, the world’s first mass-produced gasoline-electric hybrid. Since then, we have sold about 3.3 million hybrid vehicles. We expect to create exciting technologies that benefit society with Ford – and we can do so through the experience the two companies have in hybrid technology.”

Under the MOU agreement, the two companies will bring the best of their independently developed hybrid powertrain technology and knowledge to a new co-developed hybrid system, which will be used in rear-wheel-drive light trucks arriving later this decade. Specifically, Ford and Toyota will: Jointly develop as equal partners a new rear-wheel drive hybrid system and component technology for light trucks and SUVs.

Independently integrate the new hybrid system in their future vehicles separately For years, both Ford and Toyota have been working independently on similar new rear-wheel-drive hybrid systems aimed at delivering higher fuel economy in light trucks and SUVs. When the two companies began discussing this potential collaboration, they discovered how quickly they were able to find common ground.

“By working together, we will be able to serve our customers with the very best affordable, advanced powertrains, delivering even better fuel economy,” said Ford President and CEO Alan Mulally. “This is the kind of collaborative effort that is required to address the big global challenges of energy independence and environmental sustainability.”

Toyota President Akio Toyoda added: “Toyota is extremely proud to join Ford in developing a hybrid system for pickup trucks and SUVs. Not only is this tie-up clearly one aimed at making automobiles ever better, it should also become an important building block for future mobility in the U.S. By building a global, long-term relationship with Ford, our desire is to be able to continue to provide people in America automobiles that exceed their expectations.”

This rear-wheel-drive hybrid system will be based on an all-new architecture to deliver the capability truck and SUV customers demand while providing greater fuel economy. While the rear-wheel-drive hybrid system will share significant common technology and components, Ford and Toyota will individually integrate the system into their own vehicles. Each company also will determine the calibration and performance dynamics characteristics of their respective light pickups and SUVs.

In addition, as telematics plays an increasingly more important role in the in-car experience, both companies have agreed to collaborate on standards and technologies needed to enable a safer, more secure and more convenient in-car experience for next-generation telematics systems. The telematics collaboration relates only to standards and technologies, and each company will continue to separately develop their own in-vehicle products and features.

“Ford has made tremendous progress in the area of telematics,” Kuzak said. “We have unique and very good solutions today with SYNC and MyFordTouch. Working together on in-vehicle standards can only enhance our customers’ experience with their vehicles.”

Uchiyamada added: “Toyota has also invested heavily in telematics in various countries around the world, with services like the G-BOOK and G-Link. In the U.S., we have just introduced the accessible, easy-to-use Entune. By sharing our know-how and experience, we would like to offer even better telematics services in the future.”

Audi Preparing For A4 Plug-In Hybrid Car In 2014

Hackers Take Control Of A Standard Car Using A Laptop